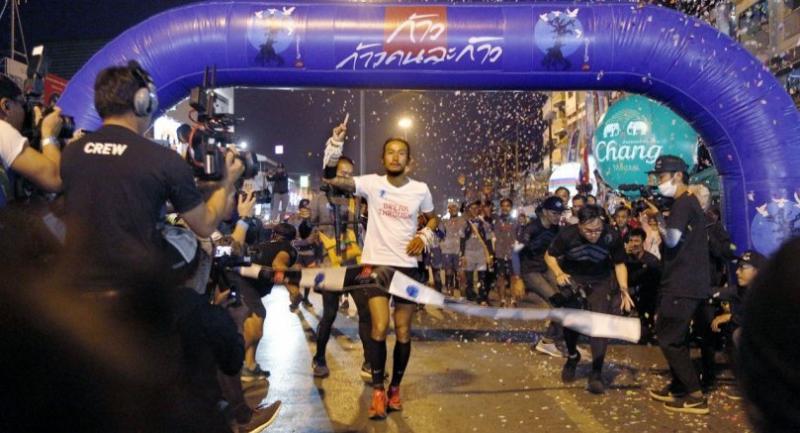 ROCK star Athiwara “Toon Bodyslam” Khongmalai on Thursday revealed a plan to organise another charity run in the middle of this year to raise funds for small provincial and district-level hospitals. His “Kao Kon La Kao” (“Take one step at a time”) campaign team has so far gathered about 10 names of needy smaller hospitals and is preparing to reveal details of the upcoming charity run. Unlike Athiwara’s much-celebrated 2017 fundraising run, this one would not span the length of the whole country, he said.

In 2017, Athiwara led a 2,215-kilometre charity run from the southernmost to the northernmost points of Thailand, raising Bt1.37 billion from donations and merchandise sales for 11 public hospitals. The charity money far exceeded his initial goal of Bt700 million.

In 2016, the Bodyslam frontman also held a 400-kilometre charity run that raised Bt63 million for the Bang Saphan hospital in Prachuap Khiri Khan.

Athiwara’s latest revelation came during a ceremony on Thursday to hand over Thailand’s first robotic neurosurgical tool to Phramongkutklao Hospital in Bangkok.

The device was among 173 items procured for 11 hospitals by the funds raised from the 2017 run. Other items included four ambulances for four military hospitals.

Phramongkutklao Hospital director Maj-General Nimit Samothan said his facility had received money from the charity run in April last year and decided to spend it on the robot tool to aid recovery of critically ill patients.

The hospital’s head of surgery Dr Thanakorn Thiensri said that the highly precise robotic device would enable shorter surgery times and patients’ faster recovery. The tool uses Nasa-developed robotic arms and formulates a map of the brain’s nerves in a mere 20 minutes to provide a highly accurate guide to the targeted tumour, he said.

Nimit added that in 2020 the hospital would set up a “Kao Kon La Kao” medical emergency centre at its new building, which is now under construction.