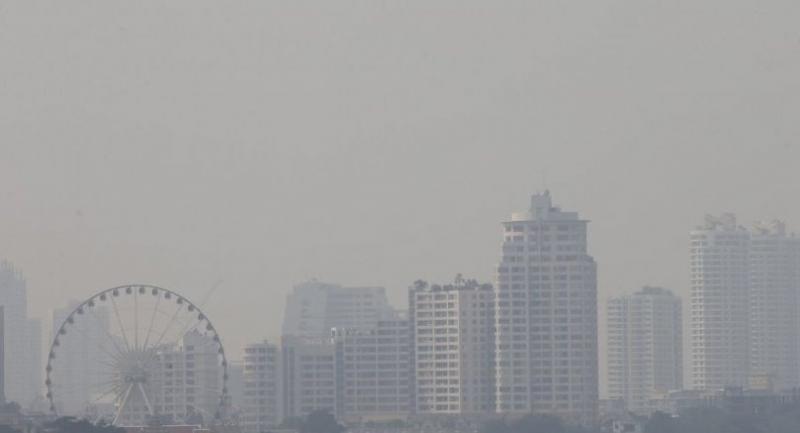 BANGKOK’S AIR is full of toxic heavy metals, researchers have discovered, and it is contributing to year-round hazardous threats to public health.

Now is the time for Thai authorities to set out the standards for controlling the emissions of every hazardous heavy metal found in the air, media were told yesterday by the director of the NIDA Centre for Research and Development of Disaster Prevention and Management.

His two academic studies of the capital’s air pollution in Bangkok revealed that within the very fine PM2.5 dust particles were at least 51 kinds of heavy metals, of which three – cadmium, tungsten and arsenic – were found at unsafe levels, according to the World Health Organisation (WHO) standard.

“Right now, Thailand has set a safe emission standard only for lead. Even though we have detected lead in the air, its concentration is still within the safe level, thanks to the authorities’ measures to get rid of lead from vehicle fuels and control the emissions of lead into the environment,” he said.

“We need a similar set of safe-emission standards for other kinds of heavy metals, as many of these hazardous substances present very serious threats to human health in both the short- and long-term.” The studies by Greenpeace also noted another threat to health from the toxic heavy metals found within PM2.5 particles. Greenpeace noted that the PM2.5 dust particles are contaminated with toxic environmental substances. The tiny particles (it takes three of them to equal the width of a human hair) can pass through the body’s dust protection system found in the respiratory tract, enter the bloodstream and reach our internal organs, delivering the toxic particles directly into our bodies.

Siwatt noted that studies found concentrations of these airborne toxic substances did not change much week-to-week throughout the year, indicating the majority of pollution sources were from local areas of Bangkok.

“Even though weather patterns during this time of the year and the transboundary haze are partially contributing to the serious smog problem, the research studies indicate that the exhaust from traffic, factories, and crematories are the true major sources of air pollution in Bangkok,” he said.

He noted that the transport sector emits pollution in many ways, as the incomplete burning of fuel in the vehicles, especially those that use diesel oil, emits a large amount of PAH. These PAH can cause cancer, while the city’s traffic congestion also causes the level of tungsten in the air to rise significantly as drivers apply their car brakes where the heavy metal serves as a brake lining. Tungsten-contaminated PM2.5 are thus released into the air.

Meanwhile, cremation is a major source of air pollution and heavy metals, Siwatt said. Many parts of the human body contain heavy metals, such as prostheses and tooth fillings, and they are released into the environment when burned.

“There are so many temples in Bangkok that cremate human bodies every day. Even though many of these temples’ crematories have installed pollution filtering systems, not 100 per cent of heavy metals are filtered,” he said.