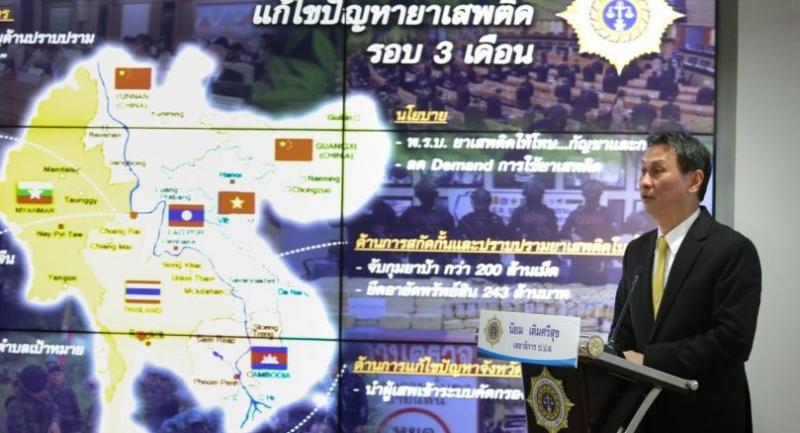 The Office of Narcotics Control Board on Tuesday announced that it had managed to prevent some 300 million methamphetamine pills from flowing into the country during its operations in the final quarter of last year.

ONCB secretary-general Niyom Termsrisuk told a press conference that the agency had also cooperated with officials from Myanmar, Laos and China to block the flow of 2 million tonnes of precursor chemicals from being smuggled to the Golden Triangle areas for making the drug during the three-month operation from October 1 to December 31.

Niyom said the ONCB and officials from the three countries had formed operational teams of more than1,000 officials combined to stop the flow of drug precursor chemicals to the Golden Triangle, straddling Thailand, Laos and Myanmar.

The precursor chemicals could have been used to produce 30 million meth pills, he added.

Moreover, ONCB officials had managed to block the smuggling of around 300 million meth pills into the country via the northern border with help from the three countries during the same period.

Niyom said the ONCB had also collaborated with other agencies to suppress drug trafficking in the Kingdom during the three-month period, and managed to seize 200 million meth pills and freeze assets worth Bt243 million from traffickers.

During the period, the ONCB led officials to search 84,000 villages and arrested 90,000 suspects in some 80,000 cases, he said, adding that 30,000 drug abusers had been sent to receive mandatory rehabilitation.

The secretary-general said meth pills remained the most troublesome drug for Thailand, followed by “ice”, or crystal meth, although most of the ice was smuggled in for re-exporting.

The ONCB is also monitoring against the abuse of ketamine, which has been widely used at Thai entertainment venues.

In addition, the agency is drafting a new drug bill to re-address the issue of marijuana and kratom leaves (Mitragynine).

Niyom said the new drug law would be the “most advanced” among Asean nations, but he declined to elaborate on its content.

Academics have called on the authorities to decriminalise the use of marijuana and kratom, arguing that they have more cure benefits than drug side effects.