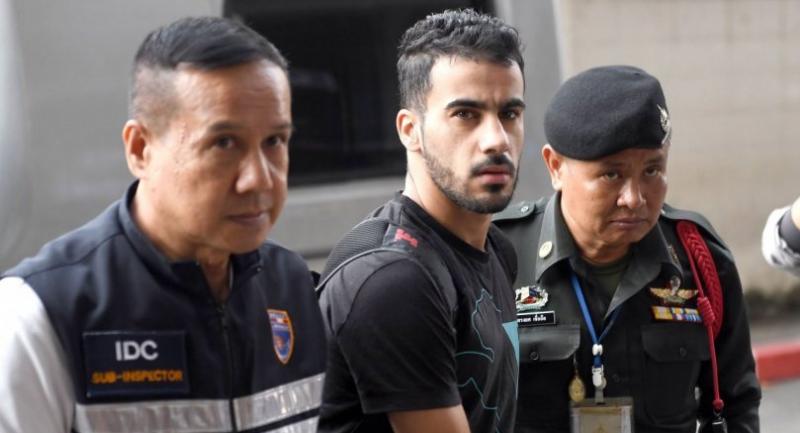 File photo: Hakeem Alaraibi (C), a former Bahrain national team footballer with refugee status in Australia, is escorted by immigration police to a court in Bangkok on December 11, 2018. // AFP PHOTO

By THE NATION,
AFP

THAILAND IS exploring solutions for the case involving a foreign footballer who faces the risk of being deported to Bahrain despite his refugee status.

Hakeem Alaraibi, who has been detained in Thailand for nearly two months now, was sentenced to 10 years in jail in Bahrain for his alleged role in helping protestors burn down a police station during demonstrations in 2012. He denied any wrongdoing and fled the country while on bail in 2013 and has since been granted asylum in Australia.

His case has caught the international spotlight, after Thai authorities arrested him in response to Bahrain’s request.

Even the secretary-general of world football’s governing body, Fifa, reportedly sent a letter to Prime Minister Prayut Chan-o-cha seeking an opportunity to discuss Alaraibi’s case with him.

“I understand the concerns of all sides. We are in the process of exploring solutions,” Prayut said.

Thai authorities are bound to comply with laws and will maintain good relationship with both Fifa and Bahrain, Prayut said.

Even as Bahrain insisted on the extradition of Alaraibi, the former captain of Australia’s national side, Craig Foster, stepped up a campaign to help him.

The campaign has handed in a petition bearing 50,000 signatures to Fifa in Zurich, which has reportedly taken action.

Alaraibi, 25, who played for Bahrain’s national youth team, now plays semi-professionally in Melbourne and Foster told a press conference in Zurich his release had become “an absolute emergency”.

“Back in Australia, the entire country is coming out very strongly in support of Hakeem,” he said. “Australia wants him back.”

He said he had met and won the support of Fifa’s secretary-general, Fatma Samba Diouf Samoura, who pledged to take the campaign to the highest level in Thailand and Bahrain, including “the football associations, the governments and of course the royal family of Bahrain”.

Alaraibi was detained entering Thailand for a vacation in November last year on an Interpol warrant that has since been withdrawn.

“He had all the rights and opportunities to defend himself in the criminal case, in which some of the suspects with him were acquitted by the court,” Bahrain’s interior minister Sheikh Rashid bin Abdullah al-Khalifa said in the government statement.

He added that Alaraibi had the right to appeal the verdict if he is returned to Bahrain.

The footballer denies the charges against him, insisting he was playing in a match at the time of the incident for which he was found guilty.

The Australian government, human rights groups, Fifa and the International Olympic Committee have all called for Alaraibi’s release.

A tiny Gulf archipelago, allied with the US and located between regional rivals Saudi Arabia and Iran, the kingdom of Bahrain has been hit by waves of unrest since 2011, when security forces crushed Shi’ite-led protests demanding an elected prime minister.