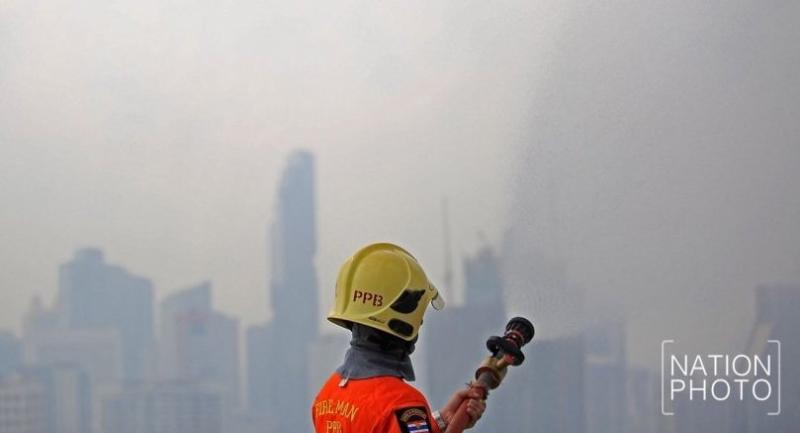 The Bangkok Metropolitan Administration (BMA) is still pinning its hopes on water sprayed into the air as a means of lowering levels of harmful PM2.5 dust particles.

Meanwhile the Pollution Control Department (PCD) named 35 areas of Greater Bangkok with unsafe PM2.5 levels on Friday morning, topped by Bang Khen district in the capital, where the level reached 83 micrograms of PM2.5 per cubic metre of air. The level along Rama II Road in Muang Samut Sakhon dropped to 81 on Friday from 91 on Thursday and Bangkok’s Bang Khun Thien district was down to 77 from 95 the day before.

Pol Lt Colonel Somkiat Nonthakaew, director of the BMA Fire and Rescue Department, reported a small change in plans from the previous day’s deployment. The three fire engines, each with a 10,000-litre water tank, were on Friday to spray water to lower heights, while the drones would be spraying the air from 30-50 metres’ altitude.

Water was also being sprayed from the 37th floors of tall buildings.

The operation would continue for “as long as it takes”, Somkiat said. The drones, which can cover one rai per flight, were on Friday spraying the area in front of City Hall 2 on Mitmaitree Road, Santiparp Park in Din Daeng, King Bhumibol 80th Anniversary Commemoration Park in Sathorn, the Wong Wian Yai area in Thon Buri and the King Rama I Monument at the Memorial Bridge in Phra Nakhon.

Somkiat also confirmed that a fleet of small planes mustered by the BMA and Bangkok Aviation Centre would on Saturday spray water along Rama II Road in Samut Sakhon.