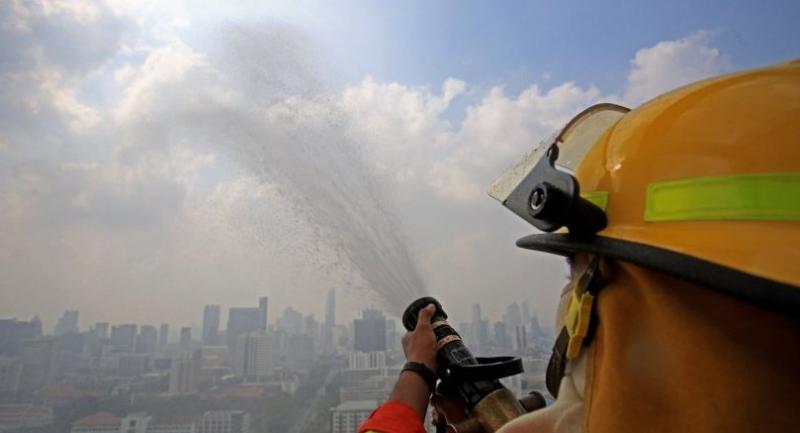 Prayut finally admits haze can be blamed on diesel-powered engines

The Govenment has apologised to Bangkok citizens about the air pollution that continues to disrupt their daily lives and is threatening their health.

The amount of harmful PM2.5 dust particles in the air has exceeded the safe limit in the capital and adjacent provinces almost daily since late December.

The blue sky typical of this time of year is hidden beyond a grey-yellow haze that could have serious long-term effects on health, and emotions are starting to burn along with the waste and cropland fires that contribute much to the problem.

Residents have been venting frustration on social media, complaining about difficulty in breathing and pressing hard for the government to do more to solve the problem in a concrete manner.

However, the Bangkok Metropolitan Administration (BMA) and relevant authorities have taken some action to ease the problem in areas under heavy smog. For instance, they have been trying to crack down on vehicles emitting black fumes and are becoming strict with people burning fires outdoors. Officials have also started keeping a close watch on industrial plants, ensuring there are no toxic fumes coming out of their chimneys. Roads are being regularly hosed down and water is being sprayed in the air in the unsubstantiated hope of bringing down the dust particles.

“The government apologises for the inconvenience caused and would like to thank everybody for support and cooperation,” Prime Minister General Prayut Chan-o-cha said in a statement on Friday. He also called on owners of diesel-run vehicles to only use their cars in Greater Bangkok when it is absolutely necessary.

“If possible, avoid using them until the smog eases,” he advised as he agreed that the main cause of the haze could be put down to incomplete engine combustion.

“As a long-term solution, we will improve the integrated public-transportation system, fuel quality and exhaust fume standards. We will have more petrol stations offering environmentally-friendly choices and start promoting hybrid or electric vehicles,” the premier said.

Separately, Dr Siwatt Pongpiachan, director of NIDA Centre Research and Development of Disaster Prevention and Management, called on the government to start handing out facemasks to people living in areas hit with heavy smog.

“That’s the first thing the government should do because smog is affecting people’s health,” he said. Sitwatt also urged the government to provide people with accurate information, so they know how best to deal with the situation.

“Thailand should learn from other countries that have battled with smog before,” he said.

He also believes Thailand should consider implementing the Clean Air Act and set up an Environmental Protection Agency that can efficiently manage the country’s environment and make it possible for all Thais to enjoy clean air.

The World Health Organisation considers PM2.5 – or particulate matter that is 2.5 micron in size or smaller – as carcinogenic.

According to the Pollution Control Department (PCD), it is unsafe if the amount of PM2.5 exceeds 50 micrograms per cubic metre of air. Anything beyond this, and people will start experiencing health problems. As of Friday, 35 areas of Greater Bangkok suffered unsafe PM2.5 levels. In Bangkok’s Bang Khen district, a cubic metre of air had 83 micrograms of PM2.5, while in Bang Khun Thien district, the level was 77 micrograms of PM2.5. The PM2.5 level along Rama II Road in Samut Sakhon’s Muang district, meanwhile, stood at around 81 micrograms per cubic metre of air. In a move to protect young children, the BMA has already ordered schools to close for two days. Meanwhile, Siam Commercial Bank and Kasikornbank have both urged members of staff who are pregnant, sensitive to dust or have children to take care of to work from home until Tuesday.

In the meantime, operations to fight smog continued in several parts of Greater Bangkok. On Friday morning, four drones took off from Bangkok City Hall to join three fire engines in the latest battle against health-threatening haze.

Water is also being sprayed from the high floors of tall buildings.

The drones, which can cover about a rai (0.16 hectares) per flight, were on Friday spraying parts of Mitmaitree Road, Santiparp Park in Din Daeng, the King Bhumibol Park in Sathorn, Wong Wian Yai in Thon Buri and near the Memorial Bridge in Phra Nakhon.

On Saturday, a fleet of small planes mustered by the BMA and Bangkok Aviation Centre will also spray water along Rama II Road in Samut Sakhon.

Army chief General Apirach Kongsompong said his forces have also actively responded to the government’s policy on fighting the pollution.