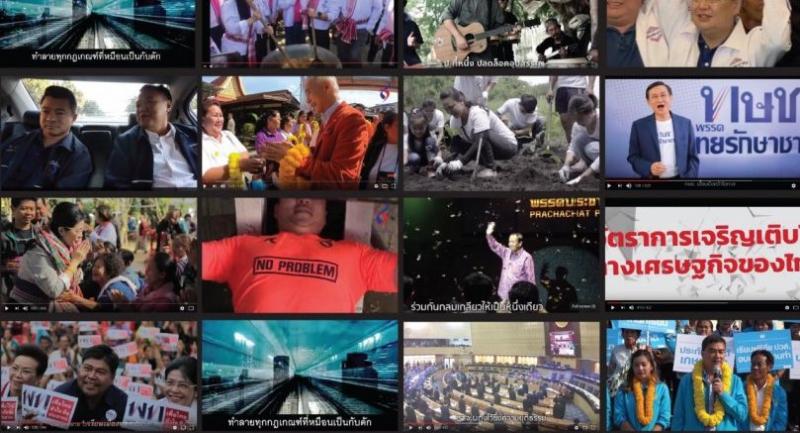 The political parties’ campaign anthems are popping up on social media, but is anyone listening? Perhaps inevitably, election campaign songs that used to boom from loudspeakers on candidates’ roving trucks are now seeping onto social media, though more than one observer has noted that the phenomenon hasn’t exactly gone viral.

Ten of the best-known political parties vying in the March 24 election have released dozens of jingles on YouTube and on their Facebook pages since late last year.

Fundamentally, “the song remains the same”, and it’s not one of Led Zeppelin’s. There are the same dreary appeals to nostalgia or, alternatively, to futurism, the same unconvincing boasts.

What distinguishes this election season’s crop of tunes from those of the past is the sheer variety of styles. The staple choices for mustering votes – rousing marches and look tung (country folk) – are now jostling with pop rock, songs-for-life and even rap.

And for the southern provinces there are political messages set to the rhythmic chanting of nasheed, sometimes known as anasyid.

As well, since a song online has to be accompanied by a music video, we’re seeing a lot of images of the parties’ candidates for the premier’s job putting in cheerful appearances at urban venues and cheerfully touring the countryside.

Some of the videos get quite creative, with animated infographics helping to explain complex policies.

“It’s a break from the traditional |political campaign songs they played at the rallies and from trucks decked out with posters. But so far these videos haven’t become virally popular, suggesting that they’re not reaching most voters,” Nantana told The Nation Weekend.

Candidates of all ages are well aware of the vast power of social media platforms, led by Line, Facebook, Twitter and YouTube. Nantana said the push is on to boost support via social networks that have high penetration among the country’s 50-million-plus voters.

Young people in particular will be targeted, especially first-time voters estimated to number around seven million, because social media are their preferred means of communication, if not their sole outlets.

Isara Choosri, a linguistics scholar at Mahidol University’s Institute for Languages and Cultures of Asia, has been hearing the candidates extolling their virtues in song on the modern tech platforms.

“It’s a new way of communicating instead of promoting their campaigns in television ads. They can go on social networks to convey their party names, policies and PM candidates and you hear the messages repeated every time you use the Internet on your phone.

“They hope their campaign music has the power to influence the poll results. But winning votes involves other factors, like realistic policies that can solve problems, as well as the candidates’ leadership abilities and popularity,” Isara told The Nation Weekend.

He noted that there’s another political song online that’s butting up against the campaign jingles – the anti-junta “Prathet Ku Me” (“What My Country’s Got”) released weeks ago by a group called Rap Against Dictatorship, but it has in turn had an influence on the candidates’ entries. Some parties have posted rap and pop-rock tunes to catch the attention of young people.

The Bhumjaithai Party has put out “Talai” (“Against All Odds”), a rap song and accompanying video starring its founder, Newin Chidchob. The video shows Newin greeting voters, while the lyrics list its proposed solutions to economic, political and social woes – and also endorses legalising cannabis for medicinal purposes.

Jaturon Chaisang, who could be the next prime minister if Thai Raksa Chart wins the election, gets down with it too, rapping out his plans for decentralising government.

Its ally, the Pheu Thai Party, shows a preference for pop rock and deploys lyrics designed to stir every heart in its grass-roots base. Its choice for premier, Sudarat Keyuraphan, is seen in the video leading her team on visits with citizens across the country, including more than a few farmers.

The Future Forward Party, widely perceived as being more youth-oriented, commissioned a band to write a cha-cha-cha tune that spells out its motto “Uplift Adjust Change”.

“Future Forward has used a lot of ideological words to convey its policy and it gets abstract, as if meant to appeal to educated middle-class voters and the younger generation,” says Nantana. “But cha-cha-cha, as opposed to rap, might not interest young voters.”

Pop rock rules for the pro-junta Phalang Pracharat Party, its song’s lyrics pushing national reconciliation and the junta’s ambition to build a “people’s state” (pracharat) through the collaboration of government, business and the citizenry.

General Prayut Chan-o-cha does not appear in the music video, though the party has names him as one of its PM candidate since the video’s release.

The Prachachart Party, led by Wan Muhamad Nor Matha and looking to dominate the Muslim-majority South, has issued two versions of the same campaign videos, one with pop music and the other in nasheed style.

“The lyrics are quite beautiful, likening the diversity among people to that of flowers in same garden,” Isara points out.

Ad Carabao personally handles the vocals on Chat Thai Pattana’s war song, which emphasises the party’s “neutrality” and readiness to work with whoever wins the election.

If the critics have an award in mind for the most boring campaign effort, the venerable Democrat Party is the likely winner. The video on YouTube doesn’t even contain images, just audio about the party’s honesty and professionalism.

The Ruam Palang Prachachat Thai party also talks about reconciliation as well as respect for the “three pillars” of nation, religious and the monarchy. There’s no sign in the video of Suthep Thaugsuban, its founder, leading viewers to surmise there was fear he would cost it votes rather than earning any.

Karn Pongprapapan, a young activist with the citizens group People Want to Vote, is utterly unimpressed with all of it.

“All the campaign videos are like propaganda,” he says. “Campaigns alone don’t influence my voting decision. We need to hear realistic policies to solve the Kingdom’s problems using democratic methods.”