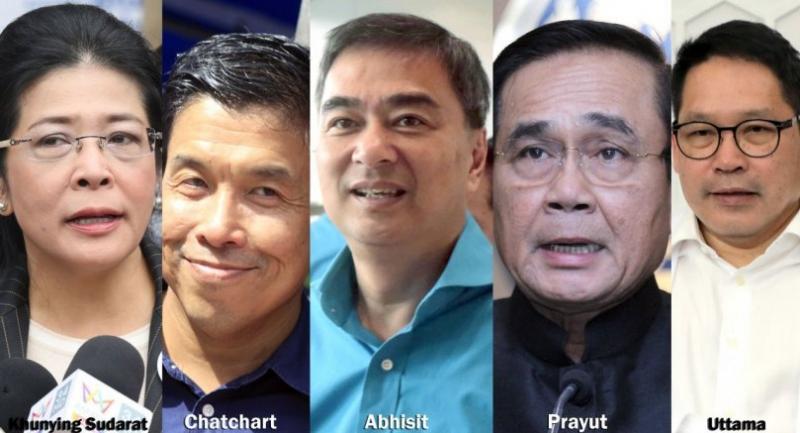 Political scientist does not expect projunta party to make a big impact among voters.

PARTIES ONE AFTER another announced their candidates for the prime minister’s post last week, a critical factor in the coming election, with voters holding a single ballot to render all of their choices.

With that single ballot, voters can select their preferred constituency candidate and a party and premier to lead the next government.

Last week amid much fanfare all the major parties revealed their nominees to take on the top government job. The names they put forward are sure to have a substantial impact on how citizens mark their ballots. The Pheu Thai Party, former lead partner in a government coalition but arch-rival to the current military-led regime, submitted three names for the top post – Khunying Sudarat Keyuraphan, Chatchart Sittipan and Chaikasem Nitisiri.

The Democrat Party has stood by its long-time leader, former PM Abhisit Vejjajiva, and named no one else, despite being permitted under law to submit three alternatives. A new party built of veteran politicians, Phalang Pracharat, named Uttama Savanayana and his mentor Somkid Chatusripitak as PM candidates, but it is widely believed that Prayut Chan-o-cha, the general who led the 2014 coup, is its No 1 choice to continue as premier.

The central question, given that each voter holds only one ballot, now becomes who among the nominated will most appeal to the electorate.

Political scientist Titipol Phakdee-wanich, dean of political science at Ubon Ratchathani University, said Pheu Thai’s three choices could remain most attractive to voters despite their being frozen out of politics for five years.

Though Sudarat is seen as Pheu Thai’s de facto leader and might be its No 1 PM candidate as well, Titipol views Chatchart as the perfect contender for the premier’s job. He cites the “vision” and experience Chatchart displayed when proposing the high-speed railway mega-project five years ago.

“Chatchart is the right one to develop both democracy and the economy,” Titipol said, referring to two areas most constrained since the coup of 2014.

However, he questioned whether Pheu Thai was being sincere in putting Chatchart’s name forward.

“I don’t know if they are for real or if they just want to use his credit to lure urban, younger and middle- and upper-class voters. We have to admit that his name isn’t as appealing in the rural areas as Sudarat’s. When campaigning in the countryside, she still takes the lead.”

Lower-class voters still remember Sudarat as the health minister, he noted, and that matters because the health-related policy is one of Pheu Thai’s strong suits, in addition to other welfare schemes and its economic performance, he added.

Looking at the Democrat Party, Titipol did not consider Abhisit the best choice for prime minister, especially when it comes to promoting democracy.

“I don’t think he’s a true believer in democracy. He’s ready to compromise with anyone, including the military, and play outside the rules. If we want a good return to democracy, I don’t see Abhisit fitting as the PM.” Titipol also doubted that Abhisit would appeal much to voters any longer, despite having once been admired for his credentials as an Oxford alumnus, as well as his youth and good looks.

Democrat supporters in the South are fonder of the party’s former leader and patriarch, Chuan Leekpai, Titipol observed.

Citizens voting for Abhisit will likely be those who despise the Shinawatra camp, he said, and this time Abhisit might have to share his support with Phalang Pracharat, a stronger “brand” known as “the Shinawatra terminator”, he observed.

Phalang Pracharat’s Prayut, Uttama and Somkid could find support among voters who are the pro-junta and anti-Shinawatra, Titipol added. Other than that, he said, especially low-income earners haven’t really bought into their campaign, considering their laggard performance in the past five years.

He doesn’t see Phalang Pracharat as offering anything close to a good candidate for PM. “They’ve had no tangible accomplishments – the promised reforms never quite came through,” he said.

“This is not to mention their relation with the coup. If Prayut really returned as PM, it would spell doom for democracy in this country.”