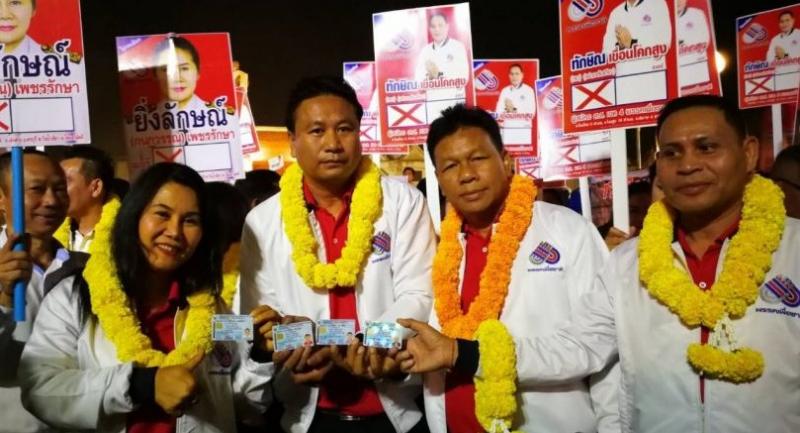 Several Pheu Chart Party candidates in the coming election have actually changed their names to “Thaksin” in the hope of capitalising on the continuing popularity of the party’s ostensible patron, former prime minister Thaksin Shinawatra.

No fewer than six candidates named Thaksin registered under the Pheu Chart banner on Monday morning in Nakhon Ratchasima, and another two in Phayao.

Pheu Chart was established as a strategic stopgap in the event the Pheu Thai Party’s ambitions are tripped up by complicated new electoral regulations.

In Nakhon Ratchasima, where 14 House seats are up for grabs, Pheu Chart registered six Thaksins and a woman candidate who changed her name to Yingluck, after Thaksin’s sister and fellow ousted ex-PM.

“I changed my name because Thaksin remains in the hearts of both the grassroots and middle-class people,” Sod-Thaksin said. “Everybody in our country knows Thaksin and Yingluck.”

The new “Yingluck” was heretofore known as Kanokwan Phetraksa and has kept that surname, but fancied a new first name that would be easier for voters to recognise.

“This is our party’s tactic,” she said. “Yingluck has done a lot of good things for the society. We don’t want people to forget her – we would like them to remember her forever.”

The former Jiraroj Kiratisakworakul and Praphan Sinchai will contest Constituency 1 and 2, respectively. They too kept their surnames.

Pheu Chart’s other man in the race stuck with his original moniker – Pichet Chaiyanetr.