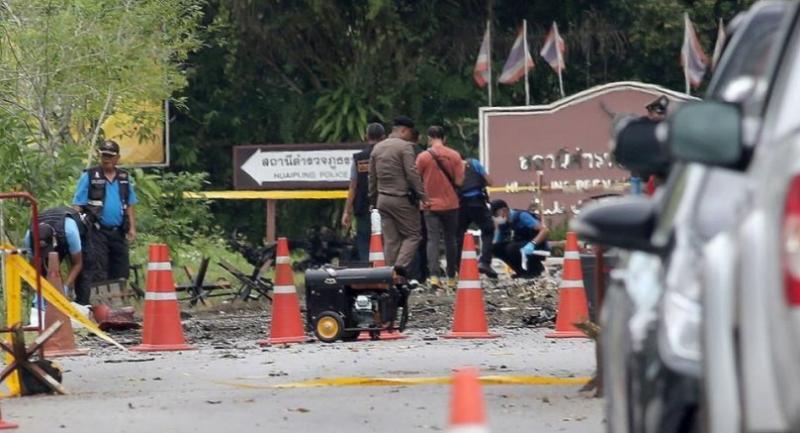 FILE PHOTO: Forensic officials on January 8 collect evidence from the site of a truck-bomb attack near a police station in Songkhla’s Thepa district that injured two police officers.

By Nakarin Chinworakomon
The Nation

A Muslim Tadika schoolteacher in Songkhla’s Sabayoi district has been brought into military custody over alleged involvement in a pickup truck-bomb attack near a police station in the province’s Thepa district on January 8, Colonel Pramote Phrom-in, spokesman for the forward command of the Fourth Region Internal Security Operation Command, said on Tuesday.

Teacher Sakariya Sama-ae was implicated by those previously arrested over the alleged bomb involvement and so was brought into custody on February 2 for questioning at the Pattani-based Inkhayuth Military Camp, Pramote said.

“The authorities' probe had found that Sakariya Sama-ae had previously been detained for questioning over alleged involvement in the 2014 bomb attack in downtown Hat Yai district,” Pramote said. He said the teacher reportedly had initially made an admission of being linked to insurgents.

Pramote said the apprehension of Sakariya was done carefully and by the book. He said authorities wanted to prevent ill-intentioned people from twisting facts and using this as the grounds to accuse the authorities of bullying a Muslim Tadika teacher in order to build support, as had been done in some previous cases.

The January 8 bomb attack injured two police officers. Authorities later found that the truck’s owner, retired teacher Amata Samothanthawee, 63, was murdered by suspected insurgents who stole his vehicle to use in the attack.