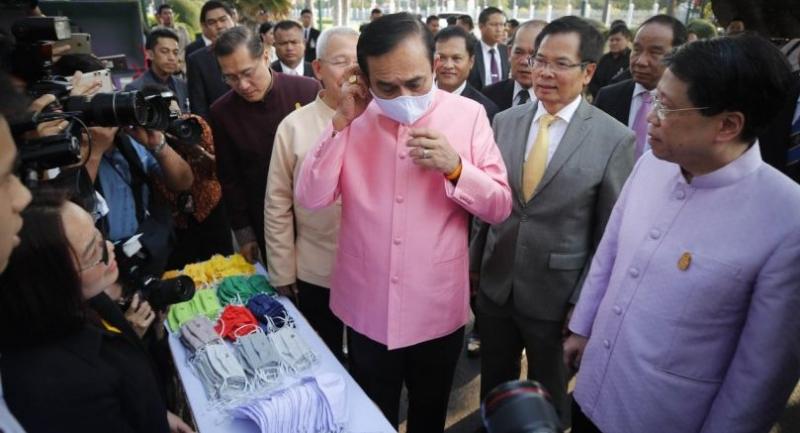 Prime Minister Prayut Chan-o-cha (C) tries on a face mask as he is shown initiatives to combat pollution, before a weekly cabinet meeting at the Government House in Bangkok, Thailand, 05 February 2019.EPA-EFE

BANNING the use of diesel vehicles, promoting the use of electric cars, and suspending the operations of polluting factories were among the measures to tackle Bangkok’s dangerous air pollution that were considered by the Cabinet yesterday.

Prime Minister Prayut Chan-o-cha told a press conference after the meeting that all related official agencies were cooperating to solve the air pollution problem in the capital and nearby provinces for the short-, medium-, and long-term.

The main focus will be on the transport sector, which has been fingered as the largest source of Greater Bangkok’s air pollution.

Up to 50 per cent of the very fine particulate matter smaller than 2.5 microns, or PM2.5, was from the traffic and transport sector, said General Prayut. Stakeholders must choose measures to reduce that to 35 per cent of PM2.5 particulates, he said.

“We need to closely examine automobile engines, whether they are properly equipped with a pollution filtering system and whether the engines are in good condition,” he said.

“I have ordered the Transport Ministry to find a solution, including measures to assist those who use diesel vehicles to switch to alternative cleaner fuels. The government has also already lowered the tax on electric cars as an incentive to promote the use of electric vehicles.”

He admitted that batteries for electric cars were expensive. With many Asean countries having already invested in electric vehicles, it is important for Thailand to have advanced electric-car technology to cope with future competition, he said. Prime Minister Prayut Chan-o-cha (R) looks at a sprinkler device as he is shown initiatives to combat pollution, before a weekly cabinet meeting at the Government House in Bangkok, Thailand, 05 February 2019. EPA-EFE

Polluting factories to be inspected

Regarding the polluting emissions from industry, Prayut said an inspection of around 100,000 factories resulted in 1,700 being put on a watch list, and operations at 600 had already been suspended and the factories told to improve their emissions.

He also asked that people not see the official operation to mitigate the smog problem by spraying water into the air as a joke, because it can at least reduce the level of larger dust particles in the air.

“The people also should avoid outdoor burning and help each other in preventing health risks from air pollution,” Prayut added.

Somchai said 172 of them were diagnosed with respiratory tract infections, 32 with allergies, six with skin irritation, four with eye irritation, three with asthma, and 115 with other conditions.

A team of doctors from the Medical Services Department will continue their inspections in Bangkok every weekend for the rest of February and March.