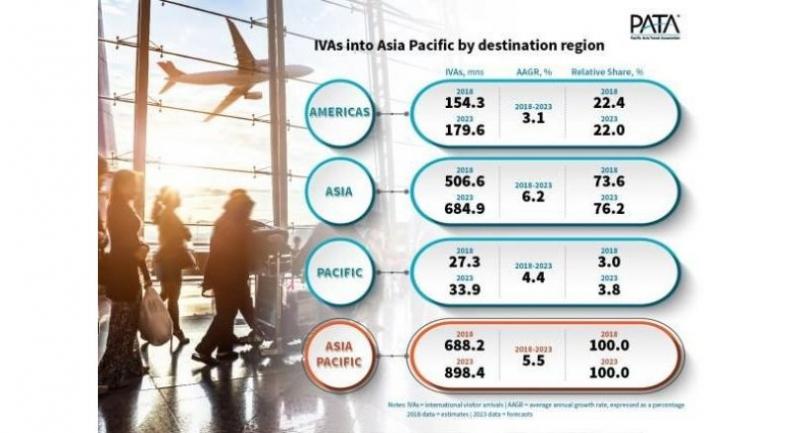 The overall annual growth rate for international visitors into 40 Asia Pacific destinations is estimated to have been around 7.8 per cent in 2018.

According to the Executive Summary of the Pacific Asia Travel Association (PATA) ‘Asia Pacific Visitor Forecasts 2019-2023’, released on Thursday, the growth generated an inbound volume of around 688 million visitors for the year – almost 50 million more foreign arrivals than in 2017.

According to PATA, 40 destinations within Asia Pacific collectively are predicted to show an average growth rate of 5.5 per cent per annum between 2018 and 2023, to host close to 900 million foreign visitor arrivals in 2023.

PATA said Asia will continue its strong growth momentum with an expected annual average growth rate for foreign visitor arrivals of 6.2 per cent between 2018 and 2023, while the Pacific and the Americas follow with average growth rates of 4.4 per cent and 3.1 per cent per year respectively, over the same period.

Driven by its strong average annual growth rate, Asia will receive the bulk of the foreign arrivals between 2018 and 2023.

After capturing a relative share of close to 74 per cent of foreign arrivals in 2018, the proportion into Asia is expected to increase to over 76 per cent by the end of the forecast period (2023).

Intra-regional travel flows remain important for both the Americas and Asia, with the former destination region seeing over three-quarters of its foreign arrivals originating within that region in both 2018 and 2023.

Similarly, for Asia, where intra-regional travel flows will increase in relative terms, from almost 94 per cent in 2018 to over 94 per cent by 2023.