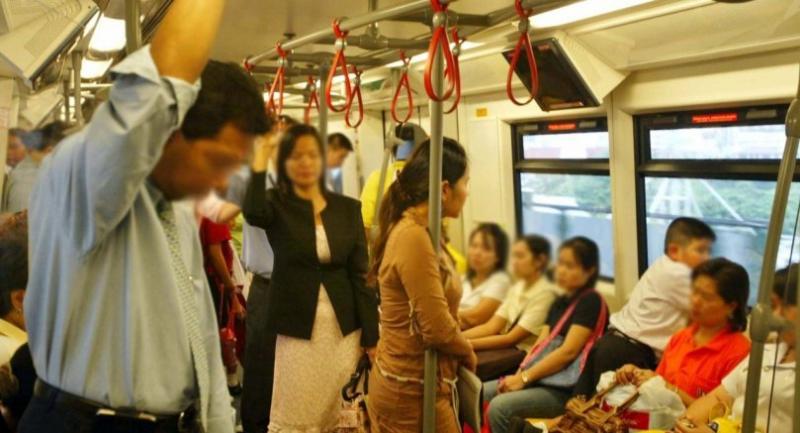 A 21-year-old female student who was groped by a man in his 40s in a crowded skytrain earlier this week has offered advice to other victims to catch offenders. The student, whose name is being withheld, said she was unable to catch the man or take photos as evidence and none of the other passengers on the skytrain helped her.

With a lack of solid evidence to file a formal complaint with police, the student said in her Facebook page that she hoped her story will serve as a caution to other commuters.

"If you encounter such a thing and didn't catch an evidence photo in time, ask for the names and phone numbers of eye witnesses so they can be your witnesses when you lodge a complaint," she said.

"At the time, you can call for guards to catch the suspect as the skytrain also campaigns against sexual harassment."

The young woman, who was wearing a student uniform at the time, got on the skytrain from the Sala Daeng station in the afternoon on February 5. She said a 175cm-tall dark-skinned man in his 40s kept trying to touch her inappropriately and when he finally touched her private part, she shouted at him. The man quickly fled out of the train at the Surasak station.

"It's frustrating, not only because I didn't catch him or have time to take evidence photos, but people on the platform just looked and let him get away," she said. She said she reported the incident to skytrain personnel but felt it was likely that he would not be caught.

The following day, she contacted police and had skytrain personnel check CCTV camera footage of the area. She said it showed the suspect riding the Silom route train and standing at the first or last carriage which is usually crowded during rush hours.

She said she would request copies of the CCTV footage to build her case.

Committing an indecent act against a person over 15 years of age who is unable to resist, is punishable by up to 10 years in jail, a Bt20,000 fine or both.

With a number of female commuters facing sexual harassment on Bangkok buses and other public transport vehicles, the “Theung Wela Pheuk”, or “Time to Intervene” campaign was launched to mark International Day for the Elimination of Violence Against Women in November 2017. Its aim is to encourage members of the public to intervene when witnessing offensive behaviour and make Bangkok public transport safe for women.