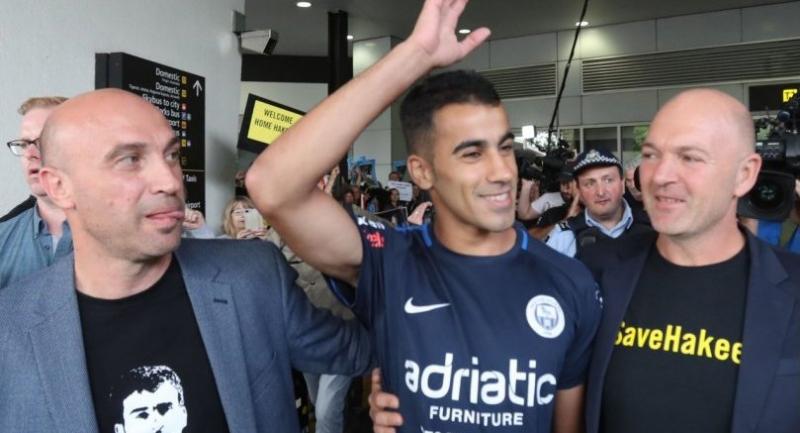 A Bahraini refugee soccer player arrived back in Australia on Tuesday, over two months after he was detained in Thailand at Bahrain's request through Interpol.

Hakeem al-Araibi, who fled the Gulf state in 2014, has refugee status in Australia and plays for semi-professional soccer club Pascoe Vale.

He was held during a honeymoon trip to Thailand in November in connection with a 10-year sentence he received in absentia in Bahrain for an attack that damaged a police station during the Arab Spring protests in 2011. He has denied wrongdoing.

The 25-year-old Al-Araibi, who was released from Thai detention on Monday night, was met with cheers and a throng of supporters when he exited Melbourne airport.

"I don't have citizenship yet, but my country is Australia. I will die in Australia and I love Australia."

International soccer body FIFA said in a statement that it is "extremely pleased" to see the footballer released from detention in Thailand and allowed to go back to Australia.

FIFA in late January expressed concern over a "very worrying situation" surrounding al-Araibi, urging Thai authorities to allow him to return to Australia.

As diplomatic pressure mounted, Bahrain dropped its bid to have al-Araibi extradited. However, the Gulf state reportedly said it maintains its guilty verdict and the right to pursue all necessary legal actions.

Upon news of al-Araibi's arrival, Australian Prime Minister Scott Morrison said in a statement that all Australians "deeply appreciate" the decision by the Thai government to allow the soccer player to return home.