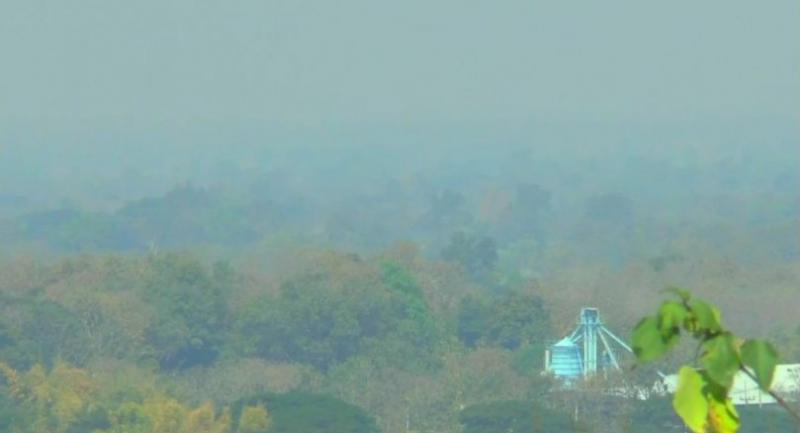 Chiang Mai’s AQI scores stood at 194 as of press time, a level considered “unhealthy”. Any figure beyond 200 is very unhealthy. Across the world, Chiang Mai’s severe air pollution was just behind the Indian capital of New Delhi (AQI 215) and Pakistan’s Lahore (AQI 197). AirVisual prides itself for making the world’s largest air-quality data available at one’s fingertips.

In Thailand, Chiang Mai is one of many provinces in the North struggling with smog, including Lampang, Phrae, Lamphun and Nan.

In Chiang Mai, the sky turned brownish yesterday due to the haze.

The Chiang Mai Air Quality Health Index (CMAQHI) Centre cited Mae Rim and Doi Lor districts as having the worst pollution with PM2.5 particles in a cubic metre of air recording 151 and 106 micrograms respectively. Hang Dong district had 99 micrograms of PM2.5, while Muang district had 73 micrograms, the centre reported.

PM2.5 are particles of 2.5 micrograms or smaller in diameter. According to the Pollution Control Department (PCD), when the amount of PM2.5 exceeds 50 micrograms per cubic metre of air, it is not safe to breathe. Prof Dr Khuanchai Supparatpinyo, who heads the Chiang Mai University’s Research Institute for Health Sciences, said yesterday that the smog had hurt people’s health, the environment, tourism and the economy.

“People of all ages are adversely affected,” he said.

According to him, outdoor fires are among the major causes of air pollution. Researchers from his institute have developed small sensors to detect the amount of dust particles in real time so as to issue timely advisories and warnings.

“We believe public awareness will nudge people to stop outdoor fires and monitor behaviour in their communities,” Khuanchai said.

His centre’s initiative has been extended to some educational institutes in nearby provinces too, so students and teachers there know how to protect themselves against polluted air. Long-time exposure to air pollution can cause many health problems, and in extreme cases, it can be linked to death.

Air-quality problems are now posing major concerns, as residents in many northern provinces have recently been breathing air containing more than double the country’s official safe limit of PM2.5.

Prime Minister Prayut Chan-o-cha told the Cabinet yesterday that efforts to fight smog must become a part of the national agenda.

“The prime minister has instructed all relevant authorities to provide guidelines to engage all sectors in finding a sustainable solution to the prevention of smog,” Deputy Government Spokesman Lt-General Werachon Sukondhapatipak said.

Phrae Governor Pongrat Piromrat said a long-running public awareness campaign on the dangers of smog would help reduce outdoor fires – which are widely blamed for the haze.

“As for short-term measures, we are now spraying water to bring down the dust,” he said.