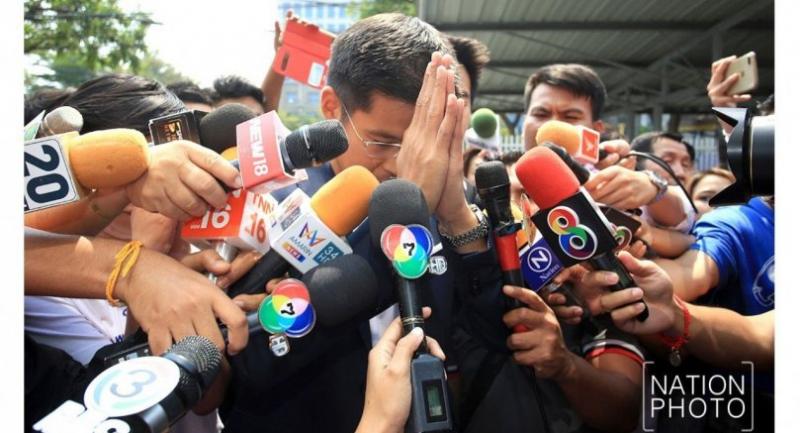 EC yet to decide on Thai Raksa Chart’s fate, but dissolution of the party would upset Pheu Thai’s poll calculations WITH Thai Raksa Chart facing the threat of party dissolution, experts believe this could affect the pro-Shinawatra camp’s election strategy and cost it a substantial number of party-list MPs.

There was speculation yesterday that the Election Commission (EC) might ask the Constitutional Court to rule on the dissolution of Thai Raksa Chart Party over its controversial nomination of Princess Ubolratana as its sole prime ministerial candidate.

The EC held a meeting on the issue yesterday and is expected to form a committee to investigate the case in response to petitions that the controversial nomination may have violated the political party law, which prohibits any political activity involving the monarchy.

Social media was abuzz with comments since 3.10pm yesterday that the EC had made a resolution, but at around 5pm the EC chairman told reporters via a Line message that the issue was still being considered.

The EC yesterday had yet to reach any conclusion on whether to approach the Constitutional Court for dissolution of Thai Raksa Chart. EC chief Ittiporn Boonpracong said the agency would continue discussions on the matter today. An EC statement said they would hold a press conference when the issue was finalised. Thai Raksa Chart emerged on the political scene late last year after the junta lifted its ban on political activities. However, most of the party members are familiar faces from Pheu Thai and other parties linked to fugitive former PM Thaksin Shinawatra.

It is widely believed that this party was created by the Shinawatra camp due to the new election rules. Under the single-ballot system, bigger parties such as Pheu Thai are at a disadvantage, as they will gain fewer seats in Parliament despite victories in individual constituencies.

Thai Raksa Chart is meant to accumulate party-list seats, while its sister party, Pheu Thai, will focus on the constituencies.

Titipol Phakdeewanich, dean of the political science faculty from Ubon Ratchathani University, said yesterday that the Shinawatra camp could find itself in trouble if Thai Raksa Chart were dissolved.

“The camp’s main players are mostly Thai Raksa Chart’s party-list candidates,” he said. “Now, there’s not much they can do to fix this because the MP registration period is over. It’s now too late to move these candidates to other related parties such as Pheu Chart.”

Pheu Chart Party is another Shinawatra-linked party that is co-led by red-shirt leader Jatuporn Prompan. It has been lying quiet for the past couple of months, while Thai Raksa Chart took the limelight. However, Pheu Chart has fielded 499 candidates for the 500 available seats.

Another option for the Shinawatra-camp is to create alliances with smaller parties after the elections, he said.

A political scientist, Stithorn Thananithichot, from King Prajadhipok’s Institute, believes that even if Thai Raksa Chart were dissolved now, it is still early enough for the camp to make adjustments.

“It’s still early and they have the time to come up with a strategy to win the votes Thai Raksa Chart was expected to,” the expert said. “And this is 3 million to 3.5 million votes we’re talking about.”

If Thai Raksa Chart really does get pushed out of the game, then Stithorn said Pheu Thai could still join up with the four other pro-democracy parties – Pheu Chart, Prachachart, Seree Ruam Thai and Future Forward.

Each of these has their pros and cons. For instance, he said, though Pheu Chart is directly connected to the Shinawatra camp, the party is sort of half-baked so it is difficult to tell if it can actually win 3.5 million votes.

Meanwhile, Future Forward has greater potential, he said, but it is too independent and has a clear stance when it comes to ideology.

Though Prachachart Party has also been linked with the Shinawatras, it was designed mainly to champion the causes of the three deep-South provinces. Hence, Stithorn said he was unsure if the party could broaden its horizons and cover the entire country.

As for Seree Ruam Thai, he said though it has a strong leader in Seripisut Temiyavet, it was not certain if it could win 3.5 million votes.

Stithorn said Thai Raksa Chart could limit the damage if its party members opted to leave the party and joined other pro-democracy parties to gain votes.

Thai Raksa Chart, meanwhile, vowed to continue campaigning for votes even though its controversial nomination was shot down.

Its leader, Preechaphol Pongpanit, was present yesterday at the party’s headquarters at around 1pm, but the only message he gave was that the party respected His Majesty’s command to bar the Princess from entering politics.

Appearing in public for the first time since last Friday, when he had submitted the controversial nomination to the EC, Preechapol met the press by performing a “wai” above his head.

“All our party members have accepted His Majesty’s command,” he said. “We will heed this command with all loyalty to His Majesty and to the Royal Family.”

He also said that his party would show no opposition to the EC decision to disqualify its PM nomination. He was at the headquarters to chair an executive meeting, which wrapped up yesterday evening with the members refusing to speak to the press.

Meanwhile, Chaturon Chaisang, chair of Thai Raksa Chart’s strategic committee, said in a comment on Facebook yesterday that he did not believe the party would be dissolved easily.

“Who says ‘fleas jump out of dying dogs?’ But if it were really [dissolved], I will stay till the end,” he posted. However, in an earlier post yesterday, Chaturon said that he had not participated in the submission of Ubolratana’s nomination last Friday and would not express an opinion. “But when I saw my political friends saying that they were ‘really happy’, I became very concerned,” he said.

Meanwhile, junta leader Prime Minister Prayut Chan-o-cha yesterday declined to comment on the issue surrounding the nomination of the Princess.

The matter is the responsibility of related agencies, he said, adding that he wanted bygones to be bygones.

“Please don’t make any trouble anymore about anything,” he said in a weekly press briefing after the Cabinet meeting. “Also, we have too many false news and rumours. Just don’t get too easily convinced.”