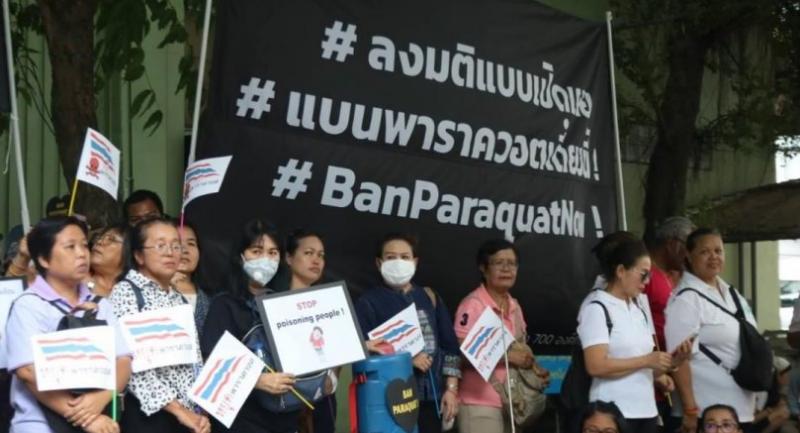 The Hazardous Substance Committee may fail to reach a decision on whether to ban paraquat, glyphosate and chlorpyrifos, said Apichin Jotikashira, Industry Ministry Deputy Permanent Secretary.

Apichin, who is a committee member, told environmental activists and those who claim they have been affected by agrochemicals today that if new information about the impact of banning the herbicides and pesticides was presented, the committee may delay a decision.

His remarks were made before the committee met to reconsider a phase-out of paraquat, glyphosate and chlorpyrifos.

“We would like to ensure that the committee members will make a decision on this issue very carefully and transparently by considering every aspect of a ban with the interests of the country as a first priority,” he said.

“There are regulations for the committee to follow during the meeting and decision-making procedures. Every member is free to make their own decision without being led or persuaded by the head of the committee. We may not even have to vote on this issue if a consensus is reached.”

Meanwhile, the BioThai Foundation has leaked the document, which it alleged was a detailed proposal of the Agriculture Department asking the committee not to ban the three chemicals, delaying any order for three years.

According to the leaked document, the Agriculture and Cooperatives Ministry agreed that Thailand should stop using the agrochemicals.

However, a majority of Thailand’s 25 million farmers heavily rely on the substances so any phase out the chemicals should be carried out step-by-step to allow farmers time to change their habits and seek alternatives.

The document also suggested that the committee should instead consider the total banning of paraquat, glyphosate and chlorpyrifos after the five agriculture ministry regulations to restrict the usage and limit imports of the three farm chemicals had been enforced for two years.

BioThai accused agriculture minister Grisada Boonrach of attempting to postpone the banning of the three agrochemicals as he wanted his successor to make the unpopular decision.