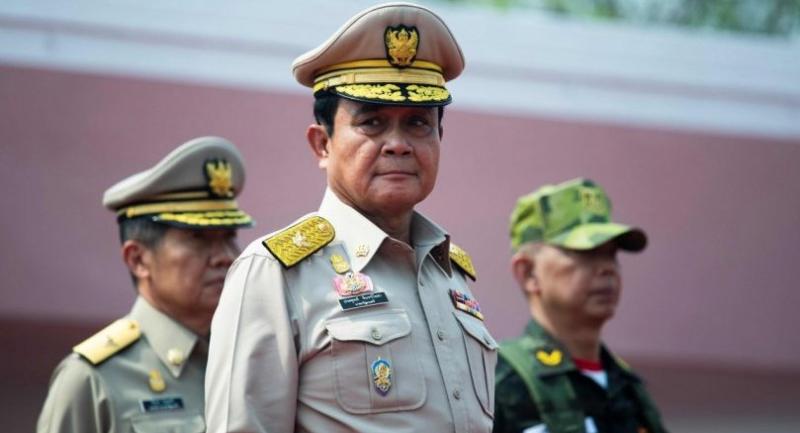 In this picture taken on February 14, 2019 Thai Prime Minister Prayut Chan-O-Cha (C) witnesses a disaster management training exercise standing next to rmy Commander in Chief Apirat Kongsompong (R) at a military base in Lopburi./Jewel SAM/AFP

Junta chief Prayut Chan-O-Cha's grip on power was tossed into doubt by the political cameo of a princess, but a week later his ambitions to rebrand as a civilian leader appear back on track, a survivor -- for now -- of Thailand's treacherous politics.

Princess Ubolratana's candidacy for premier for a party aligned with billionaire ex-premier Thaksin Shinawatra, appeared to have kicked over a totem of Thai politics: that the military alone is the unassailable partner of the monarchy.

Minutes later Prayut, a former army chief who seized power in 2014, accepted the nomination for prime minister by a junta-linked party, threatening to put him on an electoral collision course with a royal.

In a country where the public rarely gets a read on the backroom power plays of the elite, much of Thai social media erupted in glee at the supposed fall from favour of the gruff, hectoring junta chief.

Rumours of an impending coup against Prayut and his junta spun out.

But hours later the political game turned on its head. The Thaksin-aligned Thai Raksa Chart party which proposed her is now on a fast-track to dissolution by the courts for "hostile action to the constitutional monarchy", threatening to take with it the electoral aspirations of the Shinawatra camp.

That has left Prayut still very much in power -- and closer than ever to becoming prime minister after the March 24 poll.

"I ask everyone to keep smiling," Prayut said on Thursday as he attended an emergency exercise at Special Forces command base in Lopburi, central Thailand.

Earlier he paid homage to a towering portrait of the king. Throughout the day he was accompanied by army chief Apirat Kongsompong -- the new top military man appointed by the king.

After nearly five years in power the 64-year-old Prayut, still draws loyalty from many arch-royalists for his anti-Thaksin stance.

He toppled the government of Yingluck Shinawatra, Thaksin's younger sister.

Since then he has tried -- with mixed results -- to expunge the clan's influence from Thai politics, where the siblings remain vastly popular among the poor despite both being in self-exile to avoid jail terms.

But Prayut also draws derision from large sections of a public wearied by his choleric temper, finger-jabbing televised addresses and a political system rigged to secure the army's stake in politics.

Yet, still standing after the spin-dryer events of the last week, Prayut loyalists say his bid for premier is in robust shape.

"The events from last week have proved he has still the confidence of the king," a senior army officer told AFP on condition of anonymity.

"He seems confident in his chances of winning and the latest events prove he is probably right."

Those chances are bolstered by a junta-scripted constitution that creates a fully appointed upper house and limits the number of seats available for the Shinawatra's main electoral vehicle - Pheu Thai.

In the event of a hung parliament, it also allows for a premier from a minority party to be installed -- which appears to be Prayut's main route to the premiership.

Given the assumed loyalty of the junta-selected upper house, "Prayut only needs 126 seats (out of 500) in the lower house to win," Paul Chambers of the Center for ASEAN Community Studies, Naresuan University told AFP.

"It is not a level and fair playing field," he added.

As the princess's political play sent a wave of uncertainty across the kingdom, Prayut was prodded Monday into denying rumours of an impending coup as "fake news."

It was a view endorsed by some of the country's 76 governors who gathered to greet him on Thursday.

"I don't believe there will be a coup. We don't need that," Kiatisak Chantra, governor of northeastern Maha Sarakham province told AFP. For Thaksin's parties, the road to power now looks long and difficult.

Thai Raksa Chart was meant to secure secondary votes for the party list and join the bloc of constituency seats Pheu Thai expects to mop up in its north and northeastern heartlands.

"Thai Raksa Chart will probably be dissolved, it will not be able to support Pheu Thai ... Thaksin is gradually losing his aura."