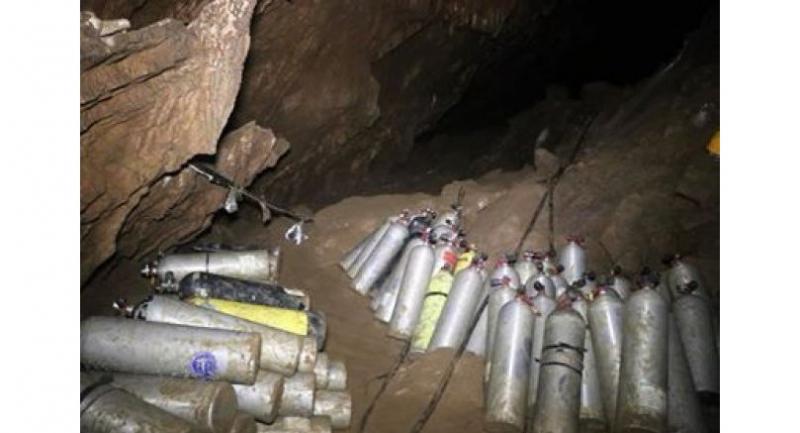 The first photos of the conditions and various rescue items left inside Tham Luang cave in Chiang Rai province, where the young Mu Pa team footballers and their coach were trapped in June last year, were released on Friday.

The photos show hundreds of oxygen tanks and rescue equipment that were left behind after the international rescue mission freed the group in July.

Chiang Mai public relations department released the photos that were taken on January 17 when a team of Navy seals, national park officials, rescue workers as well as British cave diver Vernon Unsworth toured the inside of the cave.

Unsworth was among foreign cave experts who volunteered to help rescue the young footballers.

Their visit was the first since the incident that grabbed worldwide attention and hit domestic and international headlines for weeks. The cave was closed in August last year after the rescue mission ended.

The team surveyed more than two kilometres into the cave that covered the first, second and third halls. They could not go further because of high floodwaters and thick sand.

Inside the cave, they saw electrical equipment, air pipelines, walkie-talkies, stretchers, pumping machines, and more than 3,000 gas tanks. Most of them had been in the third hall which was used as the operation centre for the rescue mission.

The successful rescue mission was led by then Chiang Rai governor Thanongsak Osothanakorn and joined by international cave divers from many western countries. The team was praised for making the impossible mission possible.

Today, visitors can visit the vicinity of the cave, although all areas will be closed off next Tuesday to allow items from the cave to be brought outside.

The removal will be carried out by Navy Seals who will categorise and document the items.