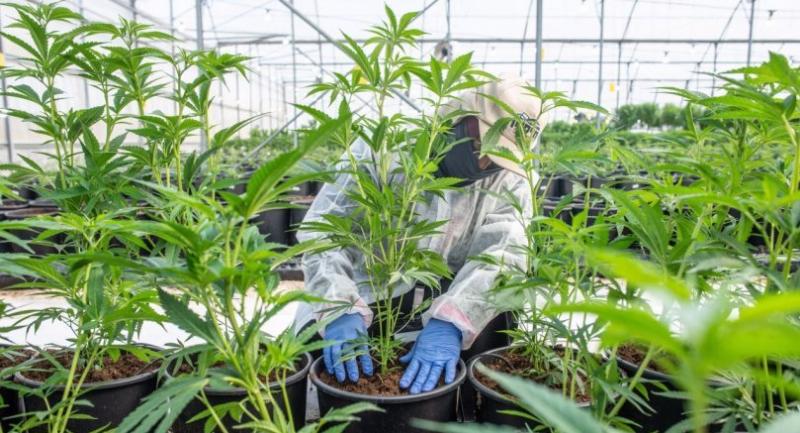 Cannabis seedlings are cared for by a worker in a green house of the cannabis cultivating and processing plant of BOL Pharma – Revadim Industrial Centre in Lod, Israel. // EPA-EFE PHOTO

THE PROBLEM of illicit patent registration continues to linger, as academics believe the hasty legalisation of medical cannabis has opened up a legal loophole for big pharmaceutical firms to reverse the revocation of 10 controversial patent applications.

However, patients relying on cannabis-based medicines in Thailand are happy that cannabis for medical use is finally legal, thanks to the newly amended Narcotics Act, which came into effect yesterday.

Yet, the benefits of this legislative reform could be adversely affected by the potential monopolisation of the medical-cannabis market, Panthep Puapongpan, dean of the Rangsit Institute of Integrative Medicine and Anti-Ageing, cautioned.

“Though it is good that cannabis for medical treatment is now legal in Thailand, the time frame of the legislation is totally inappropriate,” he said.

“The NLA [National Legislative Assembly] has betrayed the public, because it broke its promise to not enforce the law before the legal process to remove all controversial cannabis medicine patent applications is completed.”

He pointed out that under the current legal conditions, transnational pharmaceutical giants will be able to turn the tables and undo the previous removal of patent registrations. This, he said, will allow these pharmaceutical giants to take over the local medical cannabis market and charge patients a very high price for their registered cannabis medicines. As per the National Council of Peace and Order (NCPO)’s order 1/2562, the Intellectual Property Department dismissed all ineligible patent applications for cannabis-based medicines since January 28. Medical marijuana is packed by a worker at the cannabis cultivating and processing plant of BOL Pharma – Revadim Industrial Centre in Lod, Israel.// EPA-EFE PHOTO

However, Panthep said these problematic applications have not been completely removed, as the applicants – Japan’s Otsuka Pharmaceutical and Britain’s GW Pharmaceuticals – can still appeal their application’s dismissal within 60 days.

Also, he said, the sudden legislation of medical cannabis has made the NCPO order invalid, as the order used an older version of the Narcotics Act – which outlaws all forms of cannabis consumption – to ban the patent registration.

“The NLA should have waited until this 60-day period had expired before enforcing the new Narcotics Act, so these big pharmaceutical firms would not have a chance to appeal against the removal of their patent applications. Now, Thai patents are left defenceless,” he lamented.

The amended Narcotics Act legalises the use of cannabis and kratom leaves for medical purposes, though it still reserves some restrictions on the consumption, possession, planting and research of these herbs. Only licensed persons are allowed to legally use cannabis or kratom for medical purposes, while the consumption or sale of the two herbs for recreational use is still punishable by law.

Under the amended law, punishment for the possession of no more than 10 kilograms of cannabis for recreational use is five years in jail and/or a fine of Bt100,000, while the recreational use of kratom is punishable by a Bt2,000 fine.

However, those caught in possession of more than 10kg of cannabis will be charged with drug trafficking and face up to 15 years in jail and/or up to Bt1.5 million in fine, while the offence for selling kratom is two years in prison and/or a Bt100,000 in fine.

As for those who had cannabis or kratom-based medicine before the amended law was enforced, they are required to register with the Food and Drug Administration within 90 days, or the medication in their possession will be considered illegal narcotics.