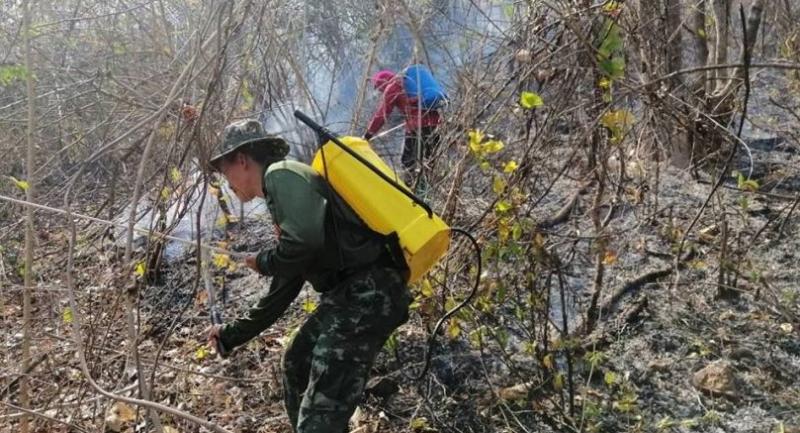 Thai soldiers’ enemy of the moment is forest fires, which they’re battling in Lamphun and Chiang Mai with shovel-wielding troops and a pair of MI17 helicopters that earlier helped douse fires in Lampang.

The woodland blazes are worsening haze across the North and Northeast, with many provinces reporting unsafe levels of PM2.5 dust particles 2.5 microns or less in diameter.

The Third Army Region’s special front command for haze control, operating in nine northern provinces, is among efforts involving a slew of agencies.

The Pollution Control Department, which has set 50 micrograms of PM2.5 per cubic metre of air as the safe limit, on Wednesday morning reported a range of 28-64 micrograms in the North. In Muang Chiang Mai, the tambons of Chang Pheuk (58) and Sri Phum (53) were at risk, and Chang Kerng in Mae Chaem district was also at 53.

The VIIRS satellite snapped a photo from space at 1.06am on Wednesday showing 73 forest-fire hot spots in the North.

There were 20 in Lampang, 17 in Nan, 11 in Lamphun, nine in Chiang Mai, eight in Phayao, five in Tak and three in Mae Hong Son.