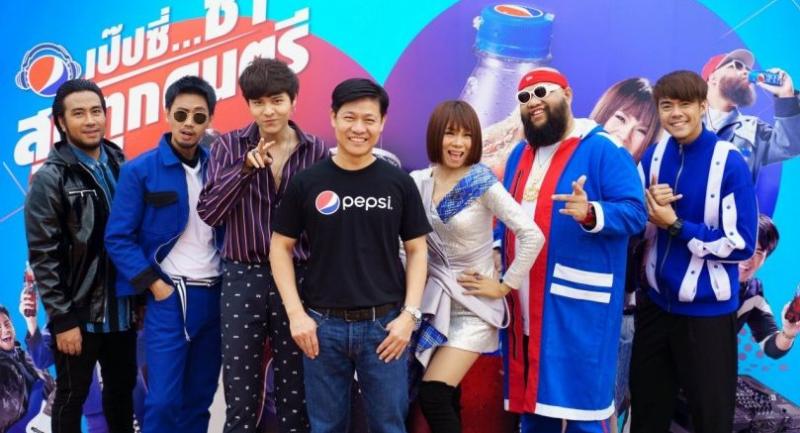 In a press release on Friday the company said it is also unveiling the new international tagline “For the Love of It”.

Somchai Ketchaikosol, marketing director – beverages, PepsiCo Services Asia Limited, said: “Pepsi at the global level has recently kicked off the year 2019 with unveiling a new marketing platform and tagline across its trademark: For the Love of It.

“Throughout the year, more than 100 countries around the world will unleash a collection of distinctive For the Love of It content that champions the cola of today’s generation.”

The company said the global tagline encourages people to go all in for the things they love. In Thailand, For the Love of It is brought to life through the brand’s passion of music – which has been at the heart of Pepsi for decades.

M is for Media integration: Pepsi is set to activate a Bt250 million full-fledged marketing communication campaign in Thailand, targeting the young generations with a focus on consumers aged between 17–22.

Anchored by a new, music-themed TV commercial, the campaign be supported by other media to create vast awareness and maximum impact including out-of-home media; mass transit and cinema ads; as well as retail and in-store media.

The brand will also be taking a highly proactive approach to digital marketing to get connected and engaged with today’s consumers via online and social media namely Facebook, Instagram, Twitter, YouTube and LINE application.

U is for Unexpected music experience: To connect and create an amazing, unexpected experience with consumers through music, Pepsi in partnership with Yuthana ‘Ted’ Boon-orm – one of country's most inspiring and creative music festival initiators – will create a series of music event themed “Pepsi Unexpected Music Experience”, featuring four genres of music: Pop, Rap, Electronic Dance Music (EDM), and ‘Luk Thung’ or Thai Country Music. Throughout this summer, the music event will be organised in three provinces including Bangkok, Udonthani and Nakorn Ratchasima.

Pepsi will continue sponsoring two music events during the Songkran festival namely “Pepsi Presents S2O Songkran Music Festival 2019”, which is the most-awaited and biggest Songkran Electronic Dance Music (EDM) festival in Bangkok, and “Wonder Waterland @ UD Town” in Udon Thani Province which is a landmark for connecting with music fans in Northeastern. In addition, the brand will partner with JOOX – the No.1 free music streaming application – in creating “Pepsi Music Roadshow”, organizing free concert on the campus in five universities, both in Bangkok and upcountry.

S for Superstars as authentic brand ambassadors: Pepsi has appointed local renowned artists from four different music genres as ambassadors of the campaign: Thanwa ‘The TOYS’ Boonsoongnern as Pop idol, rapper Nattawut Srimhok aka ‘Golf F. Hero’ as Hip-Hop idol, Boom Boom Cash band as pioneer in Thai EDM, and Jintara Poonlarp as queen of Luk Thung. They have collaborated with Pepsi in the campaign’s theme song, “Why Wait?”, encouraging people to go all in for the things they love. They all will be featuring in all advertising and promotional activities.

I for Innovative packaging: A collection of “Pepsi Music” limited-edition packaging that reflects the spirit of the four music genres is being launched for a limited time, from February to May. The four designs of music-inspired packaging will be found on packs of regular Pepsi and Pepsi Max Taste, both in PET bottle and aluminium slim can.

What’s more special is that Pepsi has been leveraging Augmented Reality (AR) technology on this package to increase engagement with the consumers via Facebook platform. This is the first-ever technological collaboration between Pepsi and Facebook in Southeast Asia. With a unique generated QR code printed on each of bottle or can, consumers can simply transform themselves upon scanning into their favourite Pepsi artists in the digital world, and further collect points to redeem unique rewards from Pepsi, worth more than Bt1 million in total.

C for Collaboration with a global fashion brand: To build on its position as a leading lifestyle brand, Pepsi has joined forces with FILA, an Italian-South Korean sportswear label, to introduce a special-edition “PEPSI X FILA” fashion capsule collection, in the iconic colours shared by both brands — blue, white and red. Inspired by the four music genres, the collaborative collection will comprise a full range of sports and casual outfits – such as t-shirts, sport jackets, hoodies, skirts, sweatpants, caps, and sneakers. More than 60 items will be available for sale at FILA store covering over 30 branches nationwide, starting on March 1st onwards.

Carbonated soft drinks (CSDs) continue to grow and were among the top three growth beverage categories, seconded only to packaged drinking water. The CSDs were valued at Bt50 billion and still enjoyed the growth rate of 1.6 per cent, comparing to the previous year. While the Bt35-billion valued cola segment grew by 1.6 per cent as well.

Despite a challenging economic situation, Pepsi has continued to achieve a growth rate higher than the industry average and outperformed all other cola brands in Thailand. The brand has continued to maintain cola leadership in non-returnable packaging nationwide, with more than 45 percent share.

“We are confident that our Pepsi Music 2019 campaign will bring fun and excitement to Pepsi fans in Thailand, especially the new generation consumers, help drive sales volume this summer and strengthen our leading position in cola segment,” said Somchai.