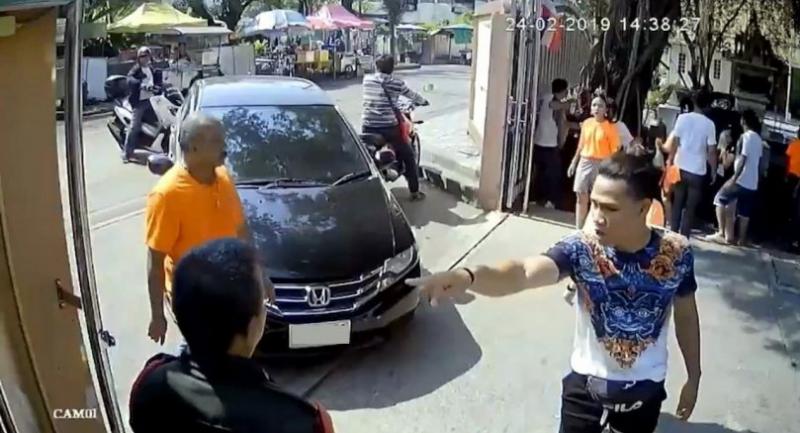 A DOZEN students who suffered when a Bangkok school was attacked on Sunday by a group of 50 angry men will be given a chance to resit the important examination they were taking at the time. The men stormed into Wat Singh secondary school and assaulted security guards, executives and teachers after being told to lower music they were playing to celebrate a monk ordination ceremony at nearby Wat Singh Temple in Chomthong district.

The students, who come from various high schools in Bangkok, were taking their General Aptitude Test and Professional Aptitude Test, commonly known as GAT-PAT, when the raid happened. Some of the men stormed into examination rooms, resulting in the testing having to be suspended for quite some time.

When calmness finally returned, exam organisers added extra time for the students to finish but 12 of the 248 students caught up in the nasty scenes could not continue as some of them had been physically injured during the attack and others were still in shock. Asst Professor Sirida Burachat, director of the National Institute of Educational Testing Service (NIETS), said a re-examination would be held at the same school on March 5, from 1-4pm.

Those who were able to finish have the option of re-sitting the exam, Sirida said, but they must notify NIETS by Thursday if they wished to do so.

Students who were injured or affected by the incident stand to be compensated, said Sirida.

Meanwhile, a monk and his mother tearfully apologised yesterday after hearing that the attack had been carried out by his friends and revellers who had been attending his ordination ceremony.

The monk, Phra Monthien, said he was so horrified when he heard about what had happened he actually considered leaving the monkhood.

“My family and I are apologetic to everyone affected by the incident,” he said in an interview with a news programme, during which he was seen using his robes to wipe his tears. “We didn’t know anything about what had happened.” Phra Monthien said that the incident took place while he was inside the Ubosot of Wat Sing Temple and he only heard about the incident after the ceremony ended.

“When I heard about the incident, I wanted to leave the monkhood. I want to tell all my friends who were involved in the incident to surrender to police,” the monk said.

The monk’s mother, whose name has not been revealed, said that her son wanted to become a monk for 15 days to show his gratitude to her. She asked for mercy from all people.

The chaotic scenes were recorded and later shared widely after being posted on several social media platforms.

When the ordination ceremony started at the temple, loud music was played through speakers even though hundreds of students were sitting their GAT-PAT tests nearby.

Exam organisers rushed to the temple and told those involved to lower the volume, explaining that it would interfere with the examination.

The violence erupted back at the school after teachers approached the revellers and asked them to lower the music.

A student told police that one of the attackers distressed a female student by kissing her on the cheek.

They also allegedly damaged school property while some others shouted out: “If my brother doesn’t get ordained, you don’t get to do exams.”

The shocked students were given some time to calm down before resuming their exams, which were extended by 30 minutes.

Nevertheless, the interruption would have hampered their chances of passing and thus gaining admission to their preferred universities, if they had not been given the option of retaking the exam. The exams have already been postponed twice, both times because of changes in he date of the general election.

Bang Khun Thien police yesterday said that arrest warrants had been granted for 20 men and that all had surrendered to police.

They have been charged with intruding on school premises, damaging state property and assault resulting in injury.

They indicated that they intend to deny the charges.