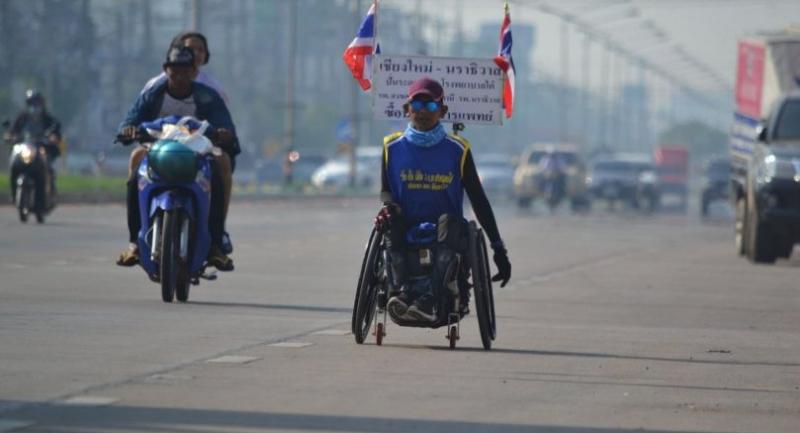 A wheelchair user has embarked on a trip from Chiang Mai to Phitsanulok to raise funds for three hospitals in the southern border provinces. Sathit Jantharangsi, 56, or Uncle Mee, reached Phitsanulok on Monday evening and was heading to Nakhon Sawan on Tuesday morning.

He left Chiang Mai rolling his wheelchair on February 16, passing through Lamphun, Lampang, Tak and Sukhothai.

He said he hoped to raise some Bt3 million to share among the Songkhla, Pattani and Narathiwat hospitals.

Sathit reached Sukhothai on Saturday and rolled his wheelchair to collect donations in the Old City Market before leaving on Sunday heading to Phitsanulok.

He rolled his wheelchair in the downtown of Phitsanulok on Tuesday morning to collect donations before heading to Nakhon Sawan. Sathit said he wanted to do his wheelchair trip once a year to raise funds for charity, and to do good for His Majesty the late King Bhumibol Adulyadej.

Last year, he travelled in his wheelchair from Hat Yai to Chiang Mai and raised Bt3.8 million for 48 Panyanukul schools for the disabled.

He said the hot weather caused him to travel just some 30 to 40 kilometres a day. He hopes to reach his destination at Narathiwat Hospital early May.