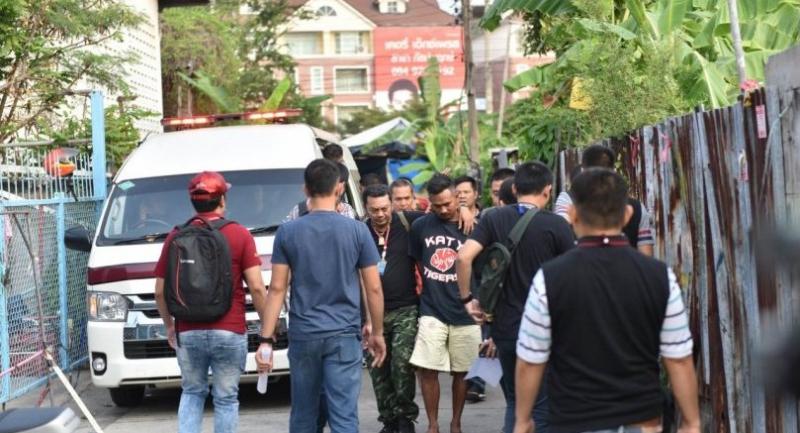 The man accused of leading last Sunday’s assault on students and teachers sitting an exam next to a monk ordination ceremony has, in a tearful apology, cited alcohol for playing a role in his actions.

Wanlop on Tuesday said he had apologised to teachers, students and everyone who were affected by the incident. He said his intent was just to have a conversation with the school director but “things got out of control due to alcohol influence.” His comment was made as a police team searched his home – as well as the residences of seven other suspects – in Soi Kamnan Maen 13. At the same time, police also conducted searches at the Bangkok houses of eight other suspects.

Bang Khun Thien police officers later brought 20 men to present at a criminal court to apply for their first 12-day detention period. The men had surrendered to police on Sunday night and Monday morning to face charges of intruding on school premises, damaging state property and assault resulting in injury. Four youths under 18 that were later brought into police custody over the same allegations are to be sent to the Department of Juvenile Observation and Protection.

Meanwhile, two privates companies have punished employees who were allegedly involved with the Sunday raid. On Monday night, TCP Group published via its social media page (Facebook.com/TCPGroupThailand/) a statement from its supplier, Durbell, that an employee who was accused of involvement in the raid had been suspended from work to facilitate the police probe, and the man's employment would be terminated if the probe concluded he was guilty.

After social media also cited that one man involved in the raid was a concession driver with Lalamove Easyvan (Thailand) Ltd, the company announced that the man had been dismissed from employment.