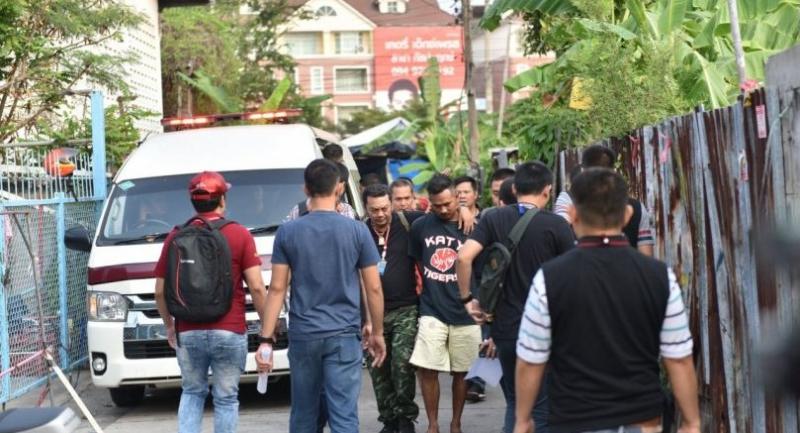 THE MAN accused of leading Sunday’s attack on students and teachers sitting an exam near a monk ordination ceremony has made a tearful apology and said alcohol was partly responsible for his behaviour. On hearing that the man was blaming drunkenness, Theerapat Khahawong, coordinator of the Youth Network against New Drinkers, called for a charge to be laid against those involved of violating the Alcohol Control Act’s ban on drinking inside a temple. A deputy national police chief later confirmed that a charge of drinking in the temple was indeed among three additional offences yesterday filed against all 24 defendants. Wanlop yesterday said he had apologised to teachers, students and everyone affected by the incident. He said his intent was just to have a conversation with the school director but “things got out of control due to the influence of alcohol”.

He made the comment as police searched his home – as well as the residences of seven other suspects – in Soi Kamnan Maen 13, while other officers also conducted searches at the Bangkok houses of eight other suspects.

The court denied bail for all the 20 men due to what it described as their brazen disrespect for the law and a risk that they would tamper with evidence and threaten witnesses. Four youths, two 16-year-olds and two 17-year-olds, later appeared at the Central Juvenile and Family Court, which approved a police application that they be kept at a juvenile detention centre until March 26.

The three additional offences filed were: being part of a group of more than five people that compelled others to do or not to do any act by putting them in fear of injury by assault; being a part of a group of more than 10 people that assembled together to do or threaten to do an act of violence; and violating the Alcohol Control Act’s prohibition for drinking at temples or religious sites, he said.

Wanlop himself was yesterday hit with an additional, seventh, charge of committing an indecent act during the raid on a high-school girl aged over 15.

The house searches earlier didn’t yield any incriminating evidence nor any link to drugs or influential figures, Chalermkiat added.

Local police plan to guard the school and provide protection for prosecution witnesses, Chalermkiat said, adding that exam sites and schools around Thailand are being told to implement security measures to prevent a recurrence and all temples are being reminded to adhere to the alcohol ban. Meanwhile, Kerdchoke Kasemwongjit, deputy director-general of the Rights and Liberties Protection Department, said officials had informed those injured in the attack that they were entitled to compensation and help in filing lawsuits.

It should take just two days to establish the number of people entitled to compensation as per the Damages for the Injured Person and Compensation and Expense for the Accused in Criminal Case Act 2001, and how much they could claim he said, citing that a teacher who sustained a broken arm would initially get Bt30,000.

On Monday night, the TCP Group published via its social media page (Facebook.com/TCPGroupThailand/) a statement from its supplier, Durbell, that an employee who was accused of involvement in the raid had been suspended from work to facilitate the police inquiry and that his employment would be terminated if the probe concluded he was guilty.

After it was reported on social media that one man involved in the raid was a concession driver with Lalamove Easyvan (Thailand) Ltd, the company announced that the man had already been sacked.