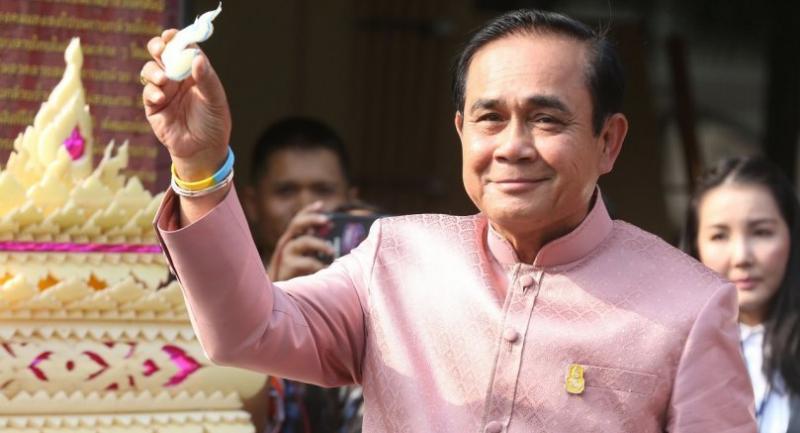 Junta chief says his vision is clear and he finds no need to take part in these ‘political’ attacks.

DISMISSING growing calls to join the prime ministerial debates, junta chief General Prayut Chan-o-cha yesterday said firmly that he attached no importance to these calls for him to outline his vision, arguing the debate stage was more about politics than policy discussions.

“I’ve long been prepared for this. But today, I just don’t see the necessity to take part,” Prayut said yesterday during his weekly press briefing, when asked about the calls for him to participate in the televised debates. “It’s not about me being scared. It’s just that we only see them attacking each other. There’s no substance. This is no debate.”

Prayut, who is now the sole prime ministerial candidate of the pro-junta Phalang Pracharat Party, stressed that he would not join any of the debate sessions.

“I’m not scared,” the junta chief said. “It’s just that I’m working. I don’t have time for this eloquence thing.” Prayut is known to be short-tempered with limited oral communication and public-speaking skills. So, while most PM candidates from all parties are living up to the election hype and joining the debates to show their leadership vision, all eyes are on the general, waiting to see how he would skirt the challenge.

Other contenders have been picking on Prayut for his absence from the prime ministerial debates.

Political scientists, meanwhile, want all candidates, including the general, to outline their vision to help voters make up their minds before casting their ballots.

In response, Prayut said plainly yesterday that his vision has been clear all along and can be seen in the government’s tagline: “Security, Prosperity and Sustainability”, which he said was based on the self-sufficiency philosophy of the late King Rama IX.

“That’s all for my vision,” Prayut concluded before elaborating that his government in the past five years had already laid out all the work on national strategy as well as other relevant legislation.

Prior to Prayut’s outright rejection of the debates, his affiliated party, Phalang Pracharat, had appeared reluctant to send him to the debates, citing legal implications given his current status as the PM and head of the ruling National Council for Peace and Order (NCPO).

They have sent a query to the Election Commission but the agency has yet to give a reply on the legality.

In a related development, rivals of the coup-installed regime today go on trial in cases whose outcomes could have long-term effects on their political lives.

If ruled guilty, the party could be dissolved and its executives could face a ban from politics for life.

Key Thai Raksa Chart leaders would not join any political rallies today, party member Weng Tojirakran told The Nation. They would see how the situation evolves before resuming their activities, he said.

Constituency candidates, however, would carry on with their campaigns, he added.

The leader of another anti-junta party, Future Forward chief Thanathorn Jungroongruangkit, will meet the attorney-general today after having been accused by the NCPO of violating the computer crime.

Thanathorn and two other party members have been accused of entering false information into the computer system, after they criticised the junta’s bid to recruit former MPs to the Phalang Pracharat Party in an online livestream last year.

The trio could be detained today if ordered by the court, according to Thanathorn.

Pro-right organisation iLaw yesterday pointed out this should not result in disqualification of the three from running in the election, as it was not the final judgement of the court.

However, the lawsuit and the imprisonment would have an impact on the fortunes of Thanathorn and the party, as they would have to divide their attention between the election campaign and fighting the case, iLaw said.