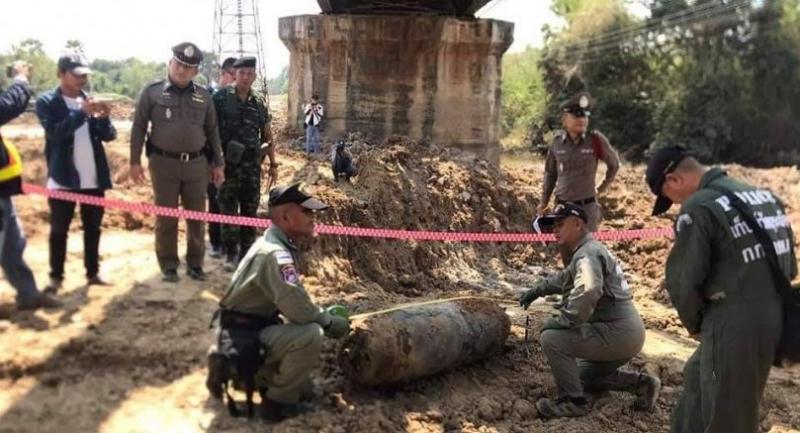 In what must be a nerve-wracking but nevertheless fun assignment, ordnance-disposal experts were due on Wednesday to detonate a 1,000-pound, World War II-vintage aerial bomb unearthed in Prachuap Khiri Khan. The Explosive Ordnance Disposal team of Royal Thai Airforce Wing 5 planned to bury the weapon in a hole at least four metres deep and set it off electronically.

The bomb was discovered under a railway bridge in Pran Buri district on Tuesday morning.

Flight Sergeant First Class Chana Chankrajang said it was gingerly transported on Tuesday evening – securely strapped in place and resting on sand in the cargo bed of a 10-wheel truck – to an abandoned airport in the Ban Benjapas area three kilometres from the bridge. The old airport was chosen for the blast because the closest residence is 2km away.

A backhoe digging under the iron bridge between Khao Tao and Wang Phong train stations to ready the ground for a second railway track clunked into the metre-long, 12-inch-wide bomb.

Train service was promptly suspended amid fears that tremors from the railway could set it off.

The bomb was trucked away at 8.10pm and three southbound trains waiting at Hua Hin station were given the green light to resume their journeys at 8.30.