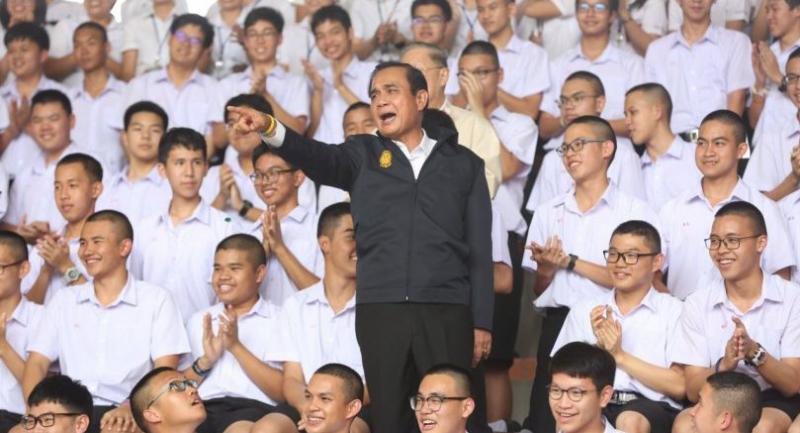 By NATTHAPAT PHROMKAEW
THE NATION

PRIME MINISTER Prayut Chan-o-cha declared yesterday that investing in soldiers is important and expenditure on military affairs cannot be seen as a financial gain or loss.

This message was sent across yesterday as several political parties listed the cancellation of mandatory conscription and the downsizing of the armed forces as key election policies.

Pheu Thai, Future Forward and Seri Ruamthai parties have announced that they will end mandatory conscription if they take over the country’s administration.

“The country can call troops out any time of the day for a mission. If you downsize the armed forces, who will help out in times of disaster?” asked Prayut, who himself was once an Army chief. The general was speaking during a visit with several Cabinet members to the Vidyasirimedhi Institute of Science and Technology and the Kamnoetvidya Science Academy in Rayong province to follow up on education progress during his government’s tenure.

“Forget about my role in the military. Think about the part the soldiers play in watching over Thailand’s borders in the air, sea and on land,” the premier said, adding that he was thinking for the people, not himself.

Thailand recruits some 100,000 conscripts yearly for its military operations as support for soldiers who have joined the military voluntarily. However, it is widely believed that some of these conscripts end up running personal errands for generals, and the Defence Ministry’s spokesperson Lt-General Kongcheep Tantrawanit also admitted that this was the case yesterday.

In fact, a popular soap opera even depicts conscripts washing clothes and cleaning the home of a senior military officer.

“But I would like to emphasise that the conscripts running personal errands are very few in number,” he said, adding that the public should not associate scenes in TV soap operas with real life.

Kongcheep also said that some 67 per cent of conscripts are under training or handling operations within the country, while the remaining 33 per cent are tasked with border-based operations.

“Our past experiences show that going to war without being fully prepared can result in huge casualties,” Kongcheep said, adding that this is the reason why mandatory conscription has been in effect since 1954.

He said conscripts acquired discipline and good ideology during their time in service, “so they will be quality citizens after they are discharged”.

Kongcheep said that though many critics believe Thailand does not need a huge number of soldiers, because it is not at war with anybody, “we still have to be ready in the military aspect. It is about national security. If we can deter attacks, we don’t really have to go to war.”

According to law, all Thai men aged 20 have to serve as conscripts unless they have health problems or are eligible for exemption. For instance, those who have joined the Thai Reserve Officer Training Corps can be exempted.

Kongcheep said some 20 per cent of the men called in for conscription voluntarily jump in. “In some years, the percentage of willing conscripts is as high as 45 per cent. This has happened in 2014 and 2015,” he added.