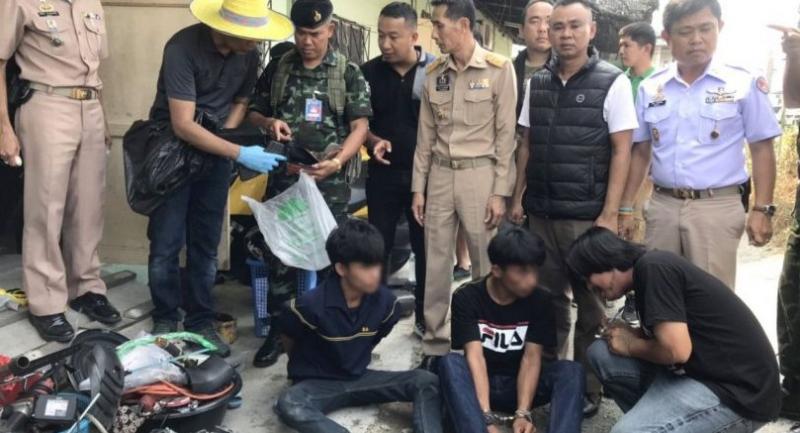 Chon Buri police have arrested two brothers and a gang leader for allegedly stealing more than 20 motorcycles to export to Cambodia or dismantle for parts.

Police arrested the brothers at their rented house in Tambon Huay Kapi of Muang district on Wednesday after a month-long investigation, and their account led to the arrest of the gang leader in another house.

Pol Col Jakkraphan Kittisirpornkul, chief of the Samed police station, said they received complaints over a month ago that two motorcycles were stolen. His investigators found that the two motorcycles had been driven into the rented house of the two brothers.

When police raided the house and found parts from some 30 motorcycles. Pongmet Sukthawee, 20, from Buri Ram, was arrested with his 14-year-old brother.

Pongmet said he drove the stolen motorcycles while his teenage brother unlocked the motorcycles.

The teenager, who told police he had stolen more than 20 motorcycles, said he could unlock motorcycles and start them with a modified screw driver. He also learned to disable the GPS device mounted on some motorcycles.

Police found some parts that had been dismantled from stolen motorcycles at his house. They also seized a grenade, a home-made gun and a AK47 assault rifle with some ammunition.

Chakrit admitted that he was the gang leader who ordered the thefts. He said his buyers in Cambodia mostly wanted Yamaha motorcycles and he would smuggle the stolen bikes to Aranyaprathet district in Sa Kaew before they would be further smuggled across the border to Cambodia.