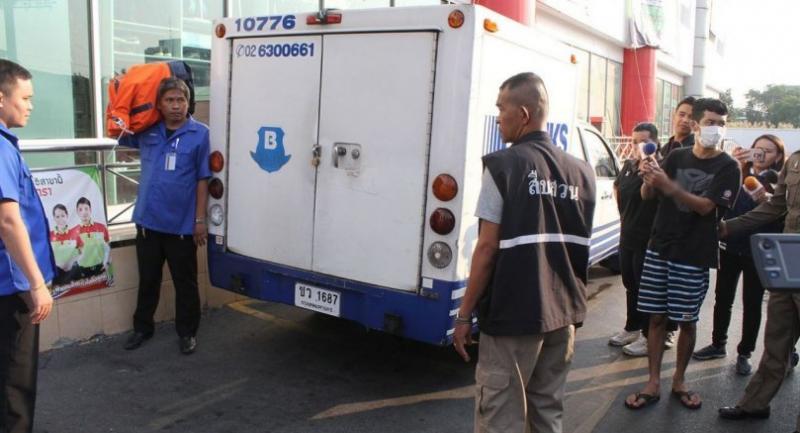 A 19-year-old suspect was taken by police on Friday to re-enact two separate robberies he had allegedly been involved in, including the Bt7.2 million heist from a money truck in Bangkok's Nong Khaem district on February 23. Suspect Jirayus Suanmi - who was arrested in Bang Bon area on February 27 - reportedly told police that he joined the recent heist, outside the Big C Extra shopping mall on Phetkasem Road, in expectation that he would get a lucrative share.

Police said he got Bt1 million from the August 2018 money truck robbery outside Central Plaza Westgate mall in Nonthaburi, where the robbers got away with Bt6 million cash.

A court issued arrest warrants for Jirayus and the alleged robbery mastermind, Thakdanai Niawrungjai, 27, who remains at large. Police are offering a Bt50,000 cash for information leading to Thakdanai's arrest.

Nong Khang Plu superintendent Pol Colonel Noppadol Kanchanapan led officers to escort Jirayus to re-enact his role in the Bangkok robbery. They went to eight locations, including the mall and a Nong Khaem apartment room where police had recovered Bt3.6 million in stolen cash.

Jirayus then re-enacted the August 2018 robbery in Nonthaburi before being sent back to apply for the detention order. Jirayus, who was riding the motorcycle, with Thakdanai as his pillion passenger, allegedly robbed the driver of the money truck and his helper who came out of the Bangkok shopping mall with Bt7.27 million cash in two bags.

Thakdanai allegedly fired a gunshot into the air, causing one worker to drop the bag and run away, and forced another worker at gunpoint to throw him the other money bag before they grabbed the bags and fled.

The Bangkok robbery and the 2018 robbery targeted a money truck company that Thakdanai had worked for and he was familiar with the routines and procedures, Jirayus told police.