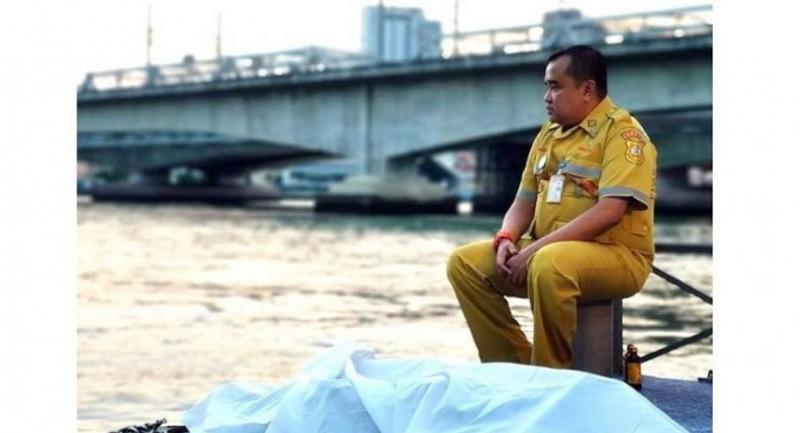 The transfer of rescue worker Noppadol “Uncle Pom” Sithongkham – recently celebrated in Thai social media as a “do-gooder” who sat for hours in the company of a drowned man while police were determining which station’s jurisdiction covered the case – was neither a punishment nor a suspension, Ruam Katanyu Foundation manager Somsak Palawat said on Monday.

The transfer of Noppadol to aid work at the foundation’s head office in Samut Prakan has been widely criticised on the Internet as “an unfair punishment of a man who just tried to do good”, after an unidentified man’s body was pulled from the Chao Phraya River at 2am on February 23.

However, Somsak said the transfer was not a punishment, but a move taken to make way for the fact-finding committee’s investigation following the incident.

If the panel later deemed Noppadol had not committed any breach of regulations, he would be reinstated to his old duties, he added.

The transfer of Noppadol – reportedly to determine whether the incident had stemmed from a miscommunication between police and rescue workers – followed another man’s Facebook post on February 23, which showed several photos of him sitting with the body on the pier to the side of the Electricity Generating Authority of Thailand’s Bang Kruay power plant from 2am until around 6am.

The post was accompanied by a caption claiming that police did not have the time to turn up at the scene in order to notify rescuers of the case’s jurisdiction.

The drowned man had been seen jumping from Rama VII Bridge – which straddles the Chao Phraya between Bangkok and Nonthaburi – at 12.30am and, after the post had been widely shared, many people questioned whether the jurisdictional delay from 2am, when the body was pulled ashore, until 6am had been because police from nearby stations were dodging the issue and passing the buck to one another.

Rescue workers are not allowed to remove the body of a deceased person until police arrive to inspect it.

Nonthaburi’s Bang Kruay precinct superintendent Pol Colonel Danthai Plangdee later dismissed speculation about buck-passing, saying that, after the Bangkok police had later pointed out it was within Bang Klay’s jurisdiction, he immediately dispatched a police officer to inspect the body.

Meanwhile, Noppadol, who has performed his duties in rescuing the injured or collecting the bodies of the deceased for the Ruam Katanyu Foundation for around 17 years, is now finding that his actions on February 23 have led to him now serving merit-makers who visit the foundation’s shrine.

Insisting that he does not feel under stress in the face of a fact-finding probe, Noppadol said on Monday he had no intention of harming anyone’s reputation and was ready to explain the facts to investigators.