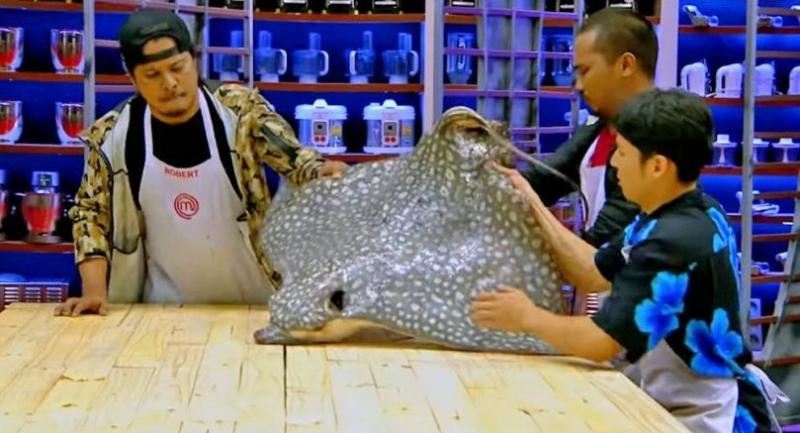 Following the public outcry over the cooking of what appeared to be spotted eagle rays during a Thai TV show on World Wildlife Day at the weekend, Marine and Coastal Resources Department chief Jatuporn Buruspat on Tuesday revealed a plan to soon propose eagle rays as protected wildlife under Thai animal-conservation law.

The cooking and consumption of eagle rays is currently not against the law, but it is a matter of appropriateness because this requires careful discretion if the presenting of such a “special ingredient” inspires members of the public to want to eat it too, hence increasing hunting of the species, Jatuporn said.

The TV show, “MasterChef Thailand”, has not yet submitted an explanation to the department about the origin of the eagle rays, but if they were taken from a national park, wildlife sanctuary or conservation territory, that could be a legal offence, he pointed out.

Meanwhile, Fisheries Department deputy director-general Arunchai Puthcharoen echoed on Tuesday that while the cooking and eating of eagle rays was not against Thai law, it was inappropriate because the International Union for Conservation of Nature (IUCN) had listed them as vulnerable for extinction, hence they deserved protection rather than consumption.

Arunchai said the eagle rays, of the Myliobatidae family, were not targeted by Thai fishermen, who had no specific equipment to catch them.

The producers of “MasterChef Thailand”, a reality cooking-competition show, had on Monday insisted that the fish – known in Thai variously as “pla yeeson”, “pla kraben nua dam” and “pla kraben kangkao” – was widely used in the preparation of many popular dishes, and that the show was not the first to present them as cooked dishes on television.

However, many argue that the use of endangered species as cooking material on such a popular TV programme could jeopardise efforts to save them.

The spotted-eagle species suspected to have been used in the show has IUCN international-conservation status, as the rays are endangered by unsustainable fishing and habitat loss and their populations are in decline.

However, eagle rays are not yet protected under the Kingdom’s animal-conservation law.