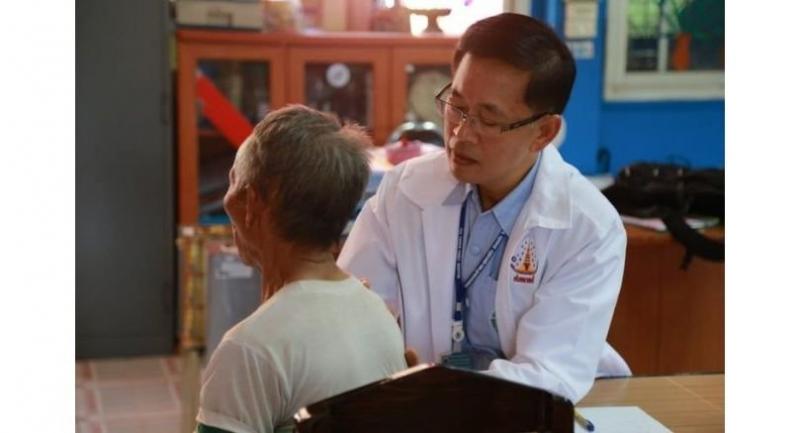 By Puangchompoo Prasert
The Nation

Winner Kitisak vows to work even harder until his retirement Kitisak credited this honour to his team, saying it gives them the courage to keep up the good work as there are still many things to do.

On a personal level, he said the recognition was an honour to him, as a son whose Chinese migrant father had taught him to be grateful to Thailand and to follow HM the late King Bhumibol Adulyadej’s guidance in public service work. The award will fuel his passion to work even harder in Nan until his retirement in six years, he added.

Siriraj has conferred the award every year since 1973, honouring physicians whose outstanding work sets a good example for public health development in rural areas.

Yesterday, faculty dean Professor Dr Prasit Watanapa announced Kitisak as recipient of the 2018 award, which includes a plaque of honour and a cash prize of Bt320,000.

Prasit praised Kitisak for his leadership, devotion and work calibre as reflected in past results in hospital administration, medical treatment and other related developments amid changes and challenges.

The selection panel’s chair, Dr Samut Chongvisal, said they had considered various factors while reviewing the candidates. The winner must have served as medical professionals in rural areas for at least five years and candidates were evaluated on the basis of many factors, including medical and health services, administrative skills, human relations and coordination, sacrifice and leadership before the panel chose Kitisak for the 45th Outstanding Rural Doctor award. “Kitisak has with determination continuously developed the hospital’s quality, and implemented a national health-service standard in a rural area despite limitations, especially budget constraints,” he said.

Kitisak, born in Prachuap Khiri Khan province, landed a doctor’s job in then-far flung Nan province after his graduating in 1990 from Prince of Songkhla University. As Pua Crown Prince Hospital was located next to Laos’ Xayaburi town, many Laotians sought treatment at the hospital, and they received treatment even though they could afford to pay only 15 per cent of their medical bill – or nothing at all. “We have to treat them. Being a doctor, you must place humanitarianism above money,” Kitisak said, even when it has to be done in a way that worsens the already tight budget.

The 125-bed hospital serves 45,000 local people and so is given a budget based on only that population, leading to the scenario of “an innate fund shortage since the beginning”. The hospital’s finances had been at the worst “level 7” status for years until Kitisak and personnel discussed and together implemented income-boosting and cost-cutting measures. Adopting a “participation-emphasis” approach created a sense of ownership and commitment among them, and resulted in the hospital’s financial status being boosted to Level 2-4, he said. The team now aims to promote a sense of ownership over the hospital among residents to ensure sustainability, he added.

Kitisak said that more people nowadays seek hospital treatment even though only a fraction of the cases actually need to involve a hospital. The gap between “wants” and “needs” must be narrowed, while health personnel must ensure members of the public have a good understanding of what requires medical treatment, and instead take care of their own general health to prevent disease.

Kitisak said that residents in big cities, and especially Bangkok, might be surprised to learn that they may have less access to emergency medical treatments due to the longer travel times from traffic jams, and the higher cost of treatment.