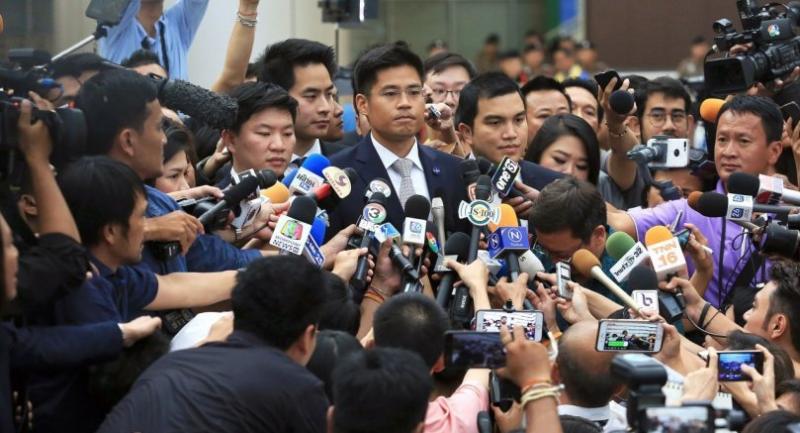 Thai Raksa Chart Party leader Preechaphol Pongpanit is surrounded by journalists at the Constitutional Court yesterday after the dissolution of his party. He and other party executives have been banned from politics for a decade.

THAI RAKSA CHART leader Preechaphol Pongpanit said yesterday that he and other party executives were “extremely saddened” by the Constitution Court’s verdict disbanding the party.

He raised questions about the ruling’s possible impacts on the political rights and freedom of candidates contesting the March 24 general election, as well as those of voters who are their supporters.

“We at Thai Raksa Chart have good intentions and have never thought of harming the country. Although our electoral rights have been revoked, we can still do good for the country in other ways,” a teary-eyed Preechaphol said, his voice shaking as he spoke to a throng of media representatives.

About 40 supporters of the party were allowed to attend the verdict reading in the Constitutional Court yesterday. The number of party supporters present was far lower than expected, after hundreds of police personnel were deployed at court premises to maintain peace.

Chartchai na Chiangmai, a member of the Constitution Drafting Commission, said he did not think the ruling would lead to street protests as had been feared. And he did not expect any negative effects on the upcoming national vote as a result of the verdict. “The court judgement was based on evident facts and relevant legal principles,” Chartchai said.

Noppadon Kannikar, director of the Super Poll survey agency, also said he did not think the party’s dissolution would affect the election or the political situation.

“Although the disbandment has occurred just weeks before the election, I don’t think there will be any violence. Right now, Thais very much want to vote,” Noppadon said.

Kalin Sarasin, chairman of the Thai Chamber of Commerce, also saw no impact from the party’s dissolution on the economy or domestic investment. “I believe the election process will continue without any interruption,” he added.

Meanwhile, Thai Raksa Chart’s candidates yesterday said they had to stop their campaigning following the court verdict. Many candidates and their staff members reacted to the news with tears.

Samai Sai-onta, a party candidate in Khon Kaen province, said his team members were dejected but offering moral support to one another.

“We are sad but we have to fight on although there will be no more campaigning,” he said.

The politician pointed to the “lost rights” of the candidates, saying they had to suffer for something that was not their fault. He added that each candidate had spent at least Bt300,000 on campaigning.

Worasuda Sukharom, a Thai Raksa Chart candidate in Kanchanaburi province, yesterday called on the party’s supporters to “cast their votes” in favour of any other party in “the democratic camp” now that Thai Raksa Chart was out of the fray.

Deputy Prime Minister Wissanu Krea-ngam, who is in charge of the government’s legal affairs, said Thai Raksa Chart candidates had to stop their campaigning immediately. Any votes for the party in the election would be considered void, he added.