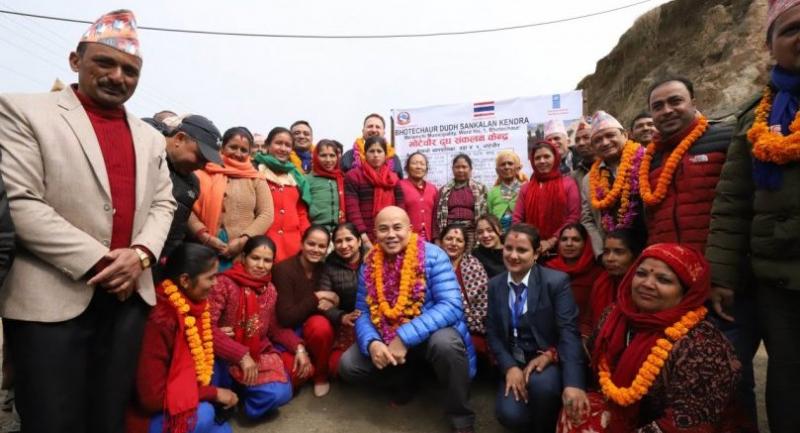 THAILAND’S AMBASSADOR to Nepal has inaugurated several buildings funded by Thailand in Nepal’s Melamchi and Helambu villages, in the area hit the hardest by the 2015 earthquakes.

Among the buildings recently opened by Ambassador Bhakavat Tanskul was a milk-collection centre, vital to the local economy.

The Thai government has been cooperating with the UN Development Programme (UNDP) to help Nepalis reconstruct their lives in regions devastated by the earthquakes.

Around 200 community infrastructures – buildings, roads, bridges, trails and market facilities, irrigation canals, micro-hydro plants and water schemes – are being built under the UNDP Community Infrastructure and Livelihoods Recovery Project. Thailand has contributed US$2 million (Bt62.5 million) to the project so far.

“I am pleased to see support from the Thai people reaching the people of Nepal through UNDP,” Bhakavat said as he inaugurated the milk-collection centre in Melamchi last week.

Some 2,000 dairy farmers are expected to benefit directly from the facility.

Renaud Meyer, local UNDP coordinator, also thanked the Thai government for its support and emphasised the significance of local ownership of the project.

Some 40,000 will benefit directly from the UNDP project, which also includes skills training, livelihood and technology support and drinking water schemes.