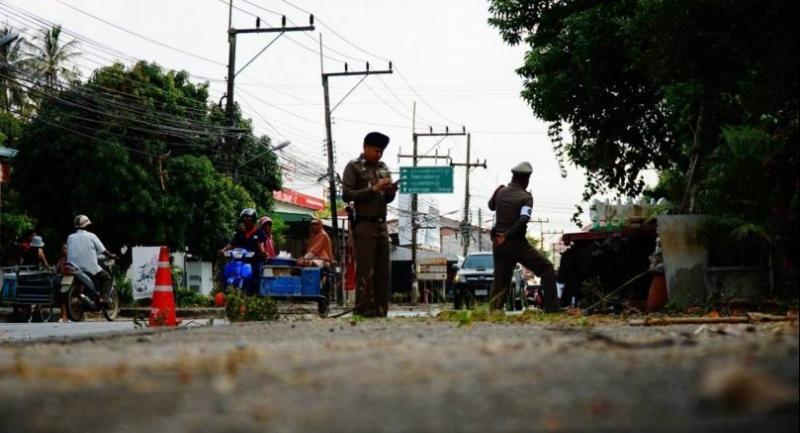 SECURITY HAS been tightened in several southern provinces following a series of bomb blasts over the weekend in Phatthalung and Satun, neither of which has a history of insurgency-related violence.

Improvised explosive devices known as pipe bombs exploded or were found triggered at 11 locations in Phatthalung. Seven more were found in neighbouring Satun, where five of them exploded.

Pipe bombs feature a tightly sealed section of a pipe filled with an explosive material.

Both provinces are adjacent to Songkhla, which has experienced insurgent attacks in recent years, along with the border provinces of Yala, Pattani and Narathiwat.

Authorities suspected insurgents or politics to be behind the weekend’s blasts.

The home-made bombs exploded overnight Saturday and Sunday. There were no reports of injuries, although the explosions damaged local businesses and state property.

Suspicions grew of a possible link with insurgents in the Muslim-majority deep South when a motorcycle carrying a pipe bomb exploded outside Satun’s Muang Police Station.

The motorbike was stolen in November in Songkhla’s Saba Yoi district, an area where insurgent attacks have occurred, Colonel Pramote Phrom-in, spokesman for the Internal Security Operations Command’s advance unit in the South, said yesterday.

A military source said the latest attacks could indicate that insurgents from the three border provinces were expanding their area of operation into Satun and Phatthalung. The source noted that yesterday marked the 110th anniversary of a 1909 Anglo-Siam treaty that recognised the Kingdom’s annexation of the sultanate of Patani.

There were also suspicions of the bomb attacks being politically motivated, aimed at discrediting the junta-backed government ahead of the March 24 election, according to the military source.

A police source said the explosions were the work of “people with ill intentions” who wanted to create a situation aimed at discrediting the government.

Police have been ordered to search vehicles on main and secondary roads in the provinces, deputy police spokesman Pol Colonel Krissana Pattanacharoen said yesterday. The public must watch out for suspicious items or persons and alert police, he said.

Fourth Army Area commander Lt-General Pornsak Poonsawat said he had ordered all Army units in the area to carefully collect evidence at the crime scenes so the culprits can be tracked down.

Governor Luechai Charoensap of Trang province adjacent to Phatthalung said he had ordered security beefed up in locations vulnerable to attacks, including shopping malls, state agencies and bus terminals.

Pitaksit Chivarattapat, president of Satun’s chamber of commerce, expressed concern that the explosions could severely affect tourism in both provinces, which are major destinations for travellers in the South.

In Phatthalung, explosions occurred in Pak Payoon district – at two grocery shops, a bicycle shop, in a rubbish bin near a school and inside a park near the train station, among other locations. Bomb devices were found at several places around the province.

In Satun, two small bombs went off outside a grocery shop in Muang district just before dawn. On Saturday night, a small bomb hidden in a rubbish bin exploded outside Muang Satun Police Station, shattering a fence and some windows.

Another home-made bomb detonated five minutes later in a nearby car park.