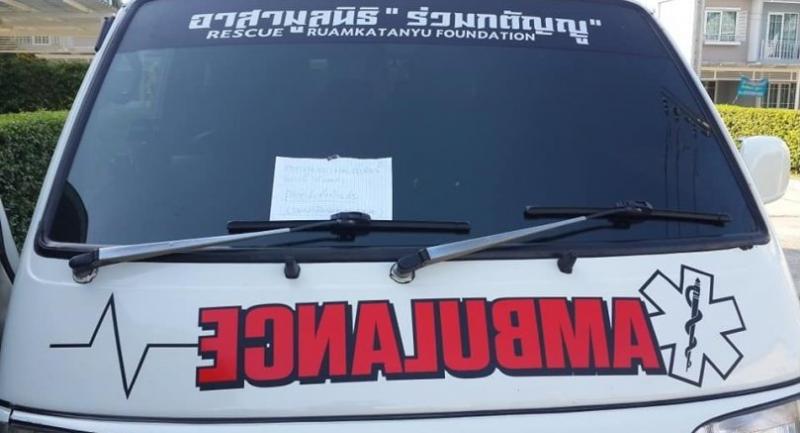 A rescue worker with the Ruamkatanyu Foundation was upset this week to find a handwritten note on the windshield of his ambulance asking him to park elsewhere because the homeowners there were frightened by its presence.

The woman who left the note might share a common aversion to rescue vehicles because some have been used to transport corpses. Not this one, though.

Without identifying the woman or the neighbourhood, Nirun Boonplien, 44, posted photos of the note on Facebook.

“May I ask you not to park this car in this area,” it said. “Everybody in my family felt scared. We did not even dare open the doors or windows.”

The rescue worker, who lives in Pathum Thani but has worked in Bangkok’s Don Mueang area for more than 10 years, wrote that he’d always used a red Toyota car on his charitable missions, but about a week ago bought a white van and mounted the signs on it.

“I usually park in the same spot waiting to help people in accidents or other emergencies,” he said. “This is the first time I’ve received such a request. I understand that the complainer thought my vehicle is used to transfer dead bodies.”

But Nirun stressed he only carries injured people and delivers first aid, and never transports corpses.

Nirun said he will look for new location to park his ambulance.