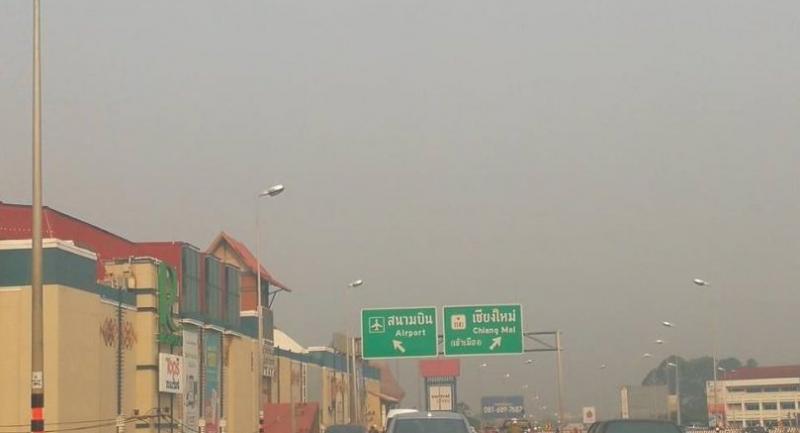 THE SMOG enveloping the North has made it unsafe to go outdoors, the Pollution  Control Department (PCD) said yesterday.

Air-quality readings by the PCD showed that the amount of PM2.5 – fine particulate matter of less than 2.5 micrometre in diameter – had soared above the official safe level of 50 micrograms (mcg) per cubic metre of air in all nine provinces in the North.

Chiang Mai yesterday saw PM2.5 reaching 130mcg per cubic metre of air in Muang district based on a 24-hour average. The overall air quality index (AQI) stood at 240, compared to the safe level of 100.

For two days in a row this week, Chiang Mai became the world’s most polluted city. Airvisual.com, which monitors air quality across the world, noted that at 12.49pm yesterday, Chiang Mai’s AQI was at 296. At 4.15pm of Tuesday, its AQI touched 229. These high levels shocked some locals, who viewed them as a cause for alarm.

Chiang Mai University has suspended classes and closed outdoor zones for two days from today. Lecturers and officials who are sensitive to pollution will be allowed to stay home, the university announced.

Though air pollution in Chiang Mai has been at unsafe levels since March 8, the governor believes it will improve soon.

“Based on weather forecasts, air quality in Chiang Mai will naturally improve in two days,” Chiang Mai Governor Supachai Iamsuwan said yesterday. “But we won’t wait for natural factors alone. Today, we will sprinkle water and do more to fight air pollution.”

This was the first time that he had spoken to media in recent weeks, after many social-media users began questioning Supachai’s whereabouts and what he was doing at the height of the smog crisis.

“I am here in Chiang Mai every day. But yesterday, I had a meeting to attend elsewhere,” Supachai said, denying that he had been absent or idle. Neighbouring province Lampang was also covered in smog, with PM2.5 levels reaching 139mcg and an AQI of 249. In Mae Hong Son’s Muang district, PM2.5 hovered around 94mcg, while the air-quality reading stood at 204.

Due to the smog, the visibility range at Mae Hong Son Airport had dropped to just 2,000 metres and prompted Bangkok Airways to suspend its flights from Mae Hong Son to Chiang Mai since Monday.

The smog in Mae Hong Son stems partly from agriculture fires, which were lit to clear land. At present, 31 hotspots have been detected in Mae Hong Son. Fires are still being detected in the North despite authorities declaring a total ban on outdoor fires.

“Prevention of forest fires will also ease air pollution,” he said, adding that as of now, he has advised people to avoid outdoor activities so as to reduce their exposure to unsafe air. The World Health Organisation has linked exposure to PM2.5 to many health conditions, especially those battling heart and lung diseases.

Apart from the North, the haze also blanketed several other areas of Thailand, including Bangkok and the northeastern province of Khon Kaen.