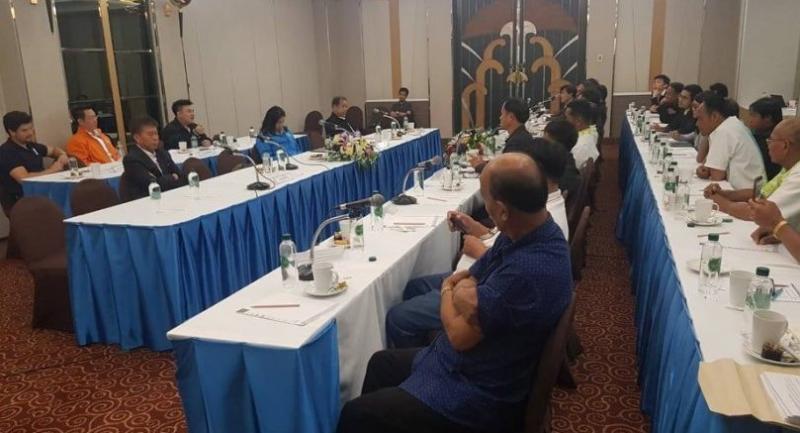 Tobacco Farmers Association meets with representatives of political parties to discuss the affect of the new cigarette tax rate on tobacco farmers.

A network of tobacco farmers is calling on political parties to help ease the impact of the 40 per cent excise tax rise on cigarettes that is scheduled for October 1 this year.

Songkran Pakdeejit, president of the Burley Tobacco Farmers Association of Phetchabun, on Thursday met with representatives from the Democrat Party, Pheu Thai, Bhumjaitahi, Chartthaipattana, and Seri Ruam Thai to discuss the affect of the new tax rate on tobacco farmers.

Cigarettes are liable for tax both in terms of volume and value, regardless of price, under the current excise tax structure. The tax based on value is divided into two rates, or 20 per cent of suggested retail price for cigarettes priced below Bt60 per pack and 40 per cent for those priced more than Bt60.

The new structure, which will come into force on October 1, will see tax for cigarette packs priced Bt60 or lower raised to 40 per cent, or the same rate applied to packs priced above Bt60.

That means the retail price for a pack will also increase.

According to the network, it is expected that the retail price per pack will increase by about Bt30 per pack to cover the new tax rate.

The network said that the new rate will push some consumers to buy illicit cigarettes which are cheaper.

Songkran said around 50,000 households of tobacco farmers in North, Northeast, and upper Central region were struggling with the cigarette tax rate that increases every year.

That would affect the cigarette production and sale volume of the state-run Thailand Tobacco Monopoly that would reduce the quota of tobacco they buy from farmers, Songkan said.

“We are so concerned if we have to quit our career,” he said.

Previously, the network asked authorities to delay enforcement of the next tax hike but so far there is no response, he added.

As the election is going to be held in the next two weeks, Songkran asked the parties to recognise their concerns and bring the issue to their parties in order to win the votes from the farmers.

Democrat Mallika Boonmee-trakool said she would take the concern to the Finance Ministry asking for a delay in enforcing the new tax rate. Her party would find a long-term measure to help the farmers, such as finding additional farming for them, she added.

At the meeting, the Thai Tobacco Trade Association released a poll result showing most grocery shops were opposed to the increase.

Jointly conducted by the association and Nida Poll in February, 81 per cent of respondents from 1,056 retailers across the country believed the new tax would increase the sale of illicit cigarettes.

Ninety-one per cent of respondents said they would be affected by the tax rate.

Association director Waraporn Namat said that in the past four to five years the government has gradually increased the tobacco tax rate in the hope of reducing the number of smokers.

“But the number [of smokers] hasn’t decreased significantly and instead they opt for buying illicit cigarettes or tobacco which are cheaper,” she added.