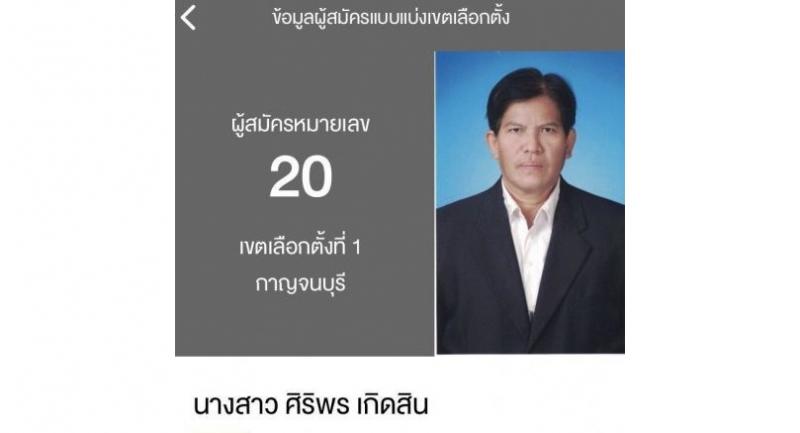 Photo of Siriporn Kertsin as appeared in the EC's manual book.

The Election Commission has been working against time to prepare for the March 24 general election, the first to be held in five years after the May 2014 coup d'etat.

Voters have found many flaws in the EC's election manual and its "smart vote" mobile application including wrong names and photos of candidates running for parliamentary seats.

The latest of the EC's so-called errors became the talk of the town when a woman's name appeared under a photo of a candidate in Kanchanaburi who was dressed in a dark suit and boasting a male haircut.

The name under the photo identified him as Siriporn Kertsin, clearly of a woman.

The EC then checked the registration form that was filled in by the candidate and found that the candidate chose the title "Miss" and crossed out both "Mr" and "Mrs".

But the EC had the last laugh after reporters telephoned the candidate at the number mentioned on the application form and talked to Siriporn.

She insisted that she is a woman although her appearance in the photo is indeed masculine. She explained that she has always looked like a tomboy and favoured a short hairstyle.

The photo on the application form showed her the way she looks at present, she told reporters. A visit to her Facebook page would identify her as an ordinary woman with short hair.