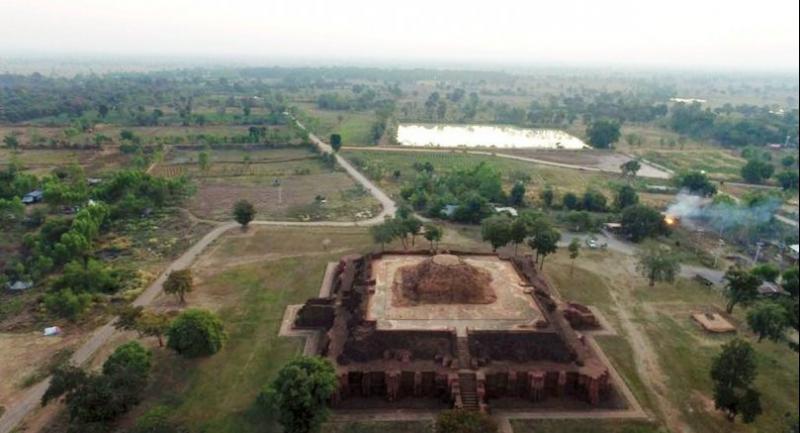 Archaeology experts suggest the Fine Arts Department declare restrictive zoning as soon as possible so that the national heritage law can be invoked to protect the site. Nation/Prasert Thepsri

Vaster than ancient Ayutthaya and perhaps just as important in its day, Si Thep in Phetchabun has begun sharing its secrets. it also sits on an oil field Archaeology experts suggest the Fine Arts Department declare restrictive zoning as soon as possible so that the national heritage law can be invoked to protect the site. Nation/Prasert Thepsri

With recognition as a Unesco World Heritage site possibly hanging in the balance, the government’s Fine Arts Department has begun delineating a buffer zone at Si Thep Historical Park in Phetchabun to try and protect it from proposed oil drilling.

ECO Orient Resources (Thailand) is eyeing a drill site just hundreds of metres from a pair of historically important stupas unearthed in recent years in an area of the park called Khao Khlang Nok.

Public hearings are being held and an Environment Impact Assessment will be conducted, but opposition is already simmering among residents and archaeologists.

Anandha Chuchoti, director-general of the Fine Arts Department, visited the site last weekend and ordered his regional office to draft a five-year reform plan for the park’s management.

It will include expansion of the designated conservation area to include Khao Khlang Nok and preparations to register the recently discovered ruins for World Heritage site status.

Though oil drilling is on hold amid objections from the department and the public, Anandha said moves to protect Si Thep from heavy industry and mining projects must be stepped up.

“However, there is a chance that the plan to drill might not go through if it fails an Environmental Impact Assessment that considers heritage impact,” she told The Nation Weekend. “The department needs to define the extent of the historically significant landscape around Si Thep, and that requires knowing how far the archaeological structure spread, both visible and non-visible.

“There could also be ancient hydraulic facilities that are still in use, such as water reservoirs and canals.”

Former department director Bovornvet Rungrujee urged it to declare the zoning as soon as possible so that the national heritage law can be evoked to protect the site. If it fails to block the oil drilling, irreparable harm could be done, he said.

“There are many other sites near Khao Khlang Nok that haven’t yet been excavated, including several ancient water tanks, that will be threatened by the drilling,” Phacharaphorn said. “The rig alone will take up one rai and roads will have to be constructed.

The vibration from the drilling and transport could destabilise the ancient infrastructure foundation and impact surrounding smaller sites,” The Khao Klang Nok site was unearthed between 2014 and 2017. Archaeologists believe the main stupa of red laterite brick, 20 metres high and 4,100 square metres at the base, was built during the Dvaravati era in the eighth or ninth century. It could be the largest stupa of that age ever found in Thailand.

“Si Thep was a cosmopolitan hub during the first millennium of the Christian era,” explained Phachara-phorn.

“It was a junction connecting cities in the Chao Phaya River basin to the Korat Plateau. Si Thep became a melding pot for two distinctive cultures – the Dvaravati and Ancient Khmer.

It arose from a prehistoric settlement where they’ve found evidence of domesticated dogs and elephants. It lasted well over 800 years.

“Si Thep was a massive city, with a population of 80,000 at its peak, which puts it in the range of large centres like Bagan. You could easily fit ancient Ayutthaya or Sukhothai within Si Thep’s moats.”

To ensure better management and stricter conservation, Anandha ordered the park perimeter to be extended and a buffer zone created to protect the core archaeological sites from encroachment and disturbances.

The buffer zone is expected to limit potential damage to undiscovered treasures and serve as a barrier against pollution from heavy industrial activities that are often harmful to heritage sites. The remains of an ancient pagoda emerges from the soil at Si Thep Historical Park, a vast site with still-undiscovered evidence of an early community. Nation/Pratch Rujivanarom

Archaeologists recently discovered that the main stupa is part of a large temple complex. Twenty-four small “hills” around the site turned out to be pagodas and most of them lie outside the historical park.

Bovornvet recommended that the department prepare for sustainable management, which would help the government’s plan to ask Unesco by next month to tentatively place Si Thep Historical Park on its World Heritage list.

“Sustainable heritage development should feature inclusive growth,” Phacharaphorn said. “You can’t develop heritage in a sustainable without the involvement of the local community.

“If the community is left behind there could be perceived conflicts of interest, and that could be harmful to the site. We see this in the looting and deliberate site destruction by farmers and communities living near many heritage sites across the country.

“Its important that we move away from seeing heritage sites as tourist attractions and think of heritage as a driver of urban development and wellbeing. It’s about generating human capital and creative industries,” she said.

Drill sites in Wichien Buri and Bo Rang are close to archaeological sites, and there are many more such instances outside Phetchabun.

“I’ve been at a site near the U-Thong ancient city in Suphan Buri where there was a stone quarry nearby,” Phacharaphorn said. “We could feel the vibrations from the explosive blasts. Many ancient stupas on that mountain have since collapsed.

“Thailand needs to urgently integrate archaeological heritage into its concessions for industrial projects.”