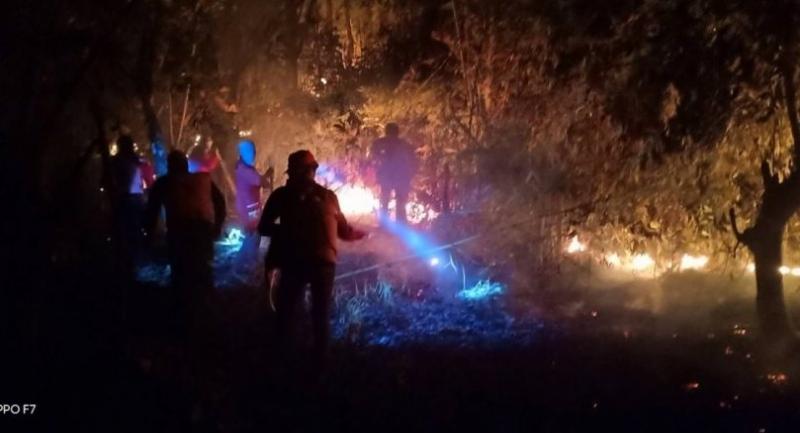 SMOG CONTINUES to choke daily life in the North, where more than 400 bushfire hotspots were identified yesterday.

Most were in Mae Hong Son, which counted 100.

Citing the safety risk, Bangkok Airways has cancelled its morning flights between Chiang Mai and Mae Hong Son until Sunday (March 24), extending the deadline from yesterday. Deliberately set brushfires are the main cause of the air pollution. With Mae Hong Son topping the list, Chiang Mai had 83 hotspots yesterday, Phayao 54, Tak 49, Nan 38, Chiang Rai 37, Lampang 31, Phrae 24 and Lamphum 20. Authorities in several provinces have declared total bans on outdoor burning, but farmers often risk the threatened fines because they have no other viable way to clear their land.

The PM2.5 in Nan stands at 119mcg, potentially harmful to everyone, not just children, the elderly and the ailing.

Several outdoor activities have been cancelled in Nan, such as sports tournaments, as a result of the danger to health.

“Coupled with agricultural fires and the outdoor burning of waste, the haze spreads quite far,” he said. “So we’ve dispatched surveillance and rapid-response teams to the smog-hit provinces”.

Protective facemasks have been widely distributed, he added, and citizens are urged to wear them the whole time they’re outdoors.

Asadang urged residents to refrain from lighting outdoor fires, to stay indoors as much as possible and to do all they can to protect their health.

“You should keep doors and windows closed, clean your house regularly and wear a facemask that can filter out fine dust particles,” he said.

Meanwhile in the North, a village head manning a temporary fire lookout in Muang Mae Hong Son “arrested” three illegal immigrants yesterday morning. He was on watch in front of Mae Surin Waterfalls National Park, wary of anyone entering the woods to start fires.

Suwit and his team have taken 20 illegal migrants into custody since setting up their checkpoint, all of whom claimed to be on their way Chiang Mai to find jobs.