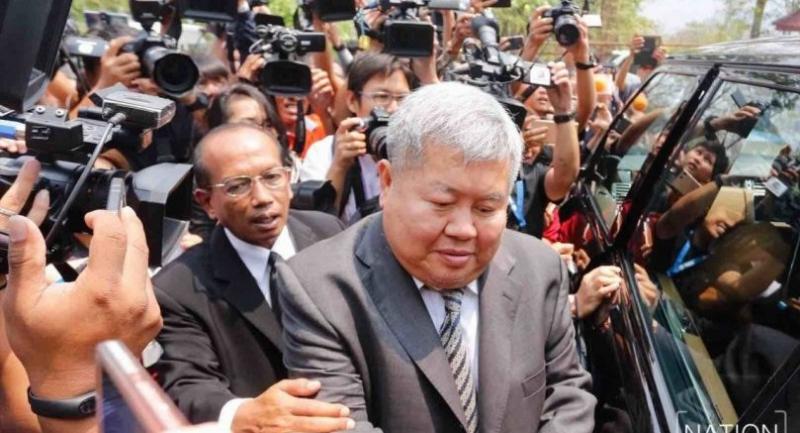 A Kanchanaburi court jailed construction tycoon Premchai Karnasuta for 16 months on Tuesday but acquitted him of poaching a black leopard in a local nature reserve.

Premchai was acquitted of possessing a black leopard carcass and collecting wildlife items in a national forest reserve without permission.

Following the verdict, reporters asked Premchai for his response. He replied briefly, “I only have one thing to say: I’m sorry.” Premchai’s close aid Yong Dodkhruea was sentenced to 13 months in jail while his driver Thanee Thummart was sentenced to a two years and 17 months and female cook Natee Riemsan to four months, suspended for two years, plus a Bt20,000 in fine.

It also asked Premchai and Thanee to pay a total Bt2 million compensation plus a 7.5 per cent annual interest to the wildlife sanctuary.

The verdict on Tuesday stemmed from the arrest of Premchai and his three aides at their campsite in Thung Yai Naresuan wildlife sanctuary in Kanchanaburi more than a year ago in early February. Premchai is facing further legal action on separate charges, including illegally possessing two pairs of tusks from African elephants found at his Bangkok home – a case in which his wife Khanitta and associate Wandee Somphum are also defendants. He and Yong also face a charge of attempting to bribe park officials.

Conservationist Sasin Chalermlarp, chairman of the Seub Nakhasathien Foundation, said that although the verdict may not have been what the public expected, he believed the case would serve as a major lesson to Thai society. He said it had already prompted widespread public opposition to the pastime of hunting protected wildlife for fun while also educating people about wildlife forensics in the quest for justice.