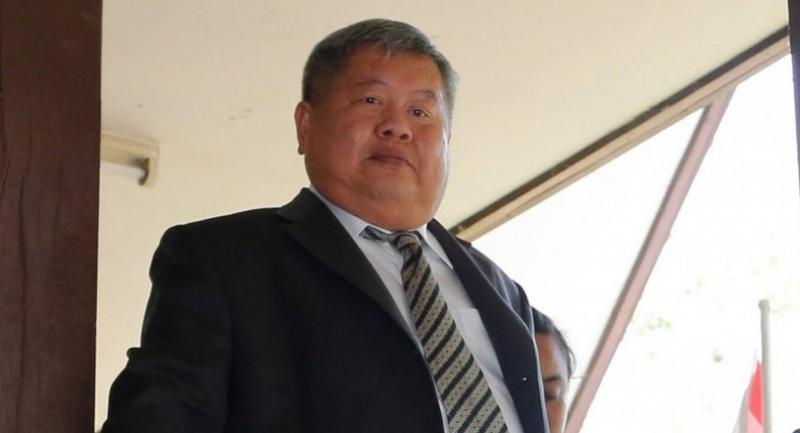 Premchai sentenced to 16 months in jail but gets reprieve in black leopard case; lawyers to appeal guilty verdict Premchai Karnasuta avoids the media as he leaves Thong Pha Phum Provincial Court in Kanchanaburi province yesterday following the verdict against him and three other suspects.He was released on bail immediately after receiving a sentence of 16 months. Nation/Korbphuk Phromlekha

The long arm of the law finally caught up with construction tycoon Premchai Karnasuta who was acquitted in the much-publicised black-leopard poaching case but sentenced to 16 months in jail on related charges.

He was also ordered to pay compensation to a wildlife sanctuary yesterday.

Though Premchai’s convictions are related to poaching, the three charges he is being punished for do not directly concern the case of the black leopard carcass found in the possession of his group inside the Thung Yai Naresuan wildlife sanctuary in Kanchanaburi in early 2018.

He was released on bail as of press time.

When asked for a response to the verdict, Premchai only said: “I’m sorry.”

The tycoon’s conviction has eased widespread public concern that the super-rich can get away with wrongdoings.

After Premchai was arrested inside the wildlife sanctuary’s prohibited zone in February 2018, not only conservationists, but even ordinary people began using the “black leopard” symbol to press for justice.

The Thong Pha Phum Court in Kanchanaburi convicted Premchai – the powerful and well-connected president of the Italian-Thai Development Public Company Limited – of three crimes: He was given six months for carrying firearms in public without permission, eight months for “aiding others in hunting for game in a wildlife sanctuary without permission” and two months for possessing the carcass of a protected species – a Kalij pheasant – without permission.

However, Premchai was acquitted of being in possession of the carcass of a black leopard and illegally collecting wildlife items in a national forest reserve.

The three other defendants in the case, all of whom work for Premchai, were also found guilty. Premchai’s close aide, Yong Dodkhruea, got 13 months in jail for carrying a weapon without permission and illegally possessing the carcass of a black leopard.

The tycoon’s driver, Thanee Thummart, was given two years and 17 months in prison for several offences, including the unauthorised possession of a black leopard’s carcass and for hunting inside a wildlife sanctuary.

The Thong Pha Phum court also ordered Premchai and Thanee to pay Bt2 million plus 7.5 per cent annual interest in compensation to the Department of National Parks, Wildlife and Plant Conservation, which oversees the Thung Yai Naresuan wildlife sanctuary where Premchai’s group was arrested.

Premchai and Yong have been released on a bail of Bt400,000 each, while Thanee is out on a Bt500,000 guarantee. Their lawyers have vowed to fight the guilty verdict. Wichien Chinnawong, who led the arrest of Premchai’s group and received several awards for his action, said yesterday that he was satisfied to some extent with the verdict.

“I think the verdict is quite fair to the black leopard and the animals killed,” Wichien said, adding that he had confidence in the judiciary.

He added that the public wants to see whether the country’s laws also apply to the rich, and this time the case has followed legal proceedings.

“The court has given us a clear answer today,” he said.

Conservationist Sasin Chaler-mlarp, chairman of the Seub Nakhasathien Foundation, said that though the verdict may not have measured up to public expectation, it would still serve as a major lesson to Thai society.

He said the case had already prompted widespread public opposition to the pastime of hunting protected wildlife, while also educating people about wildlife forensics in the quest for justice.

Since the black-leopard case caught media attention, Premchai has been facing a lot of legal trouble. Apart from yesterday’s case, he is facing several charges, including illegally possessing two pairs of African elephant tusks, which were found in his Bangkok home. His wife Khanitta and associate Wandee Somphum are also defendants in this case.

Premchai and Yong also face the charge of trying to bribe park officials when they turned up to arrest them.