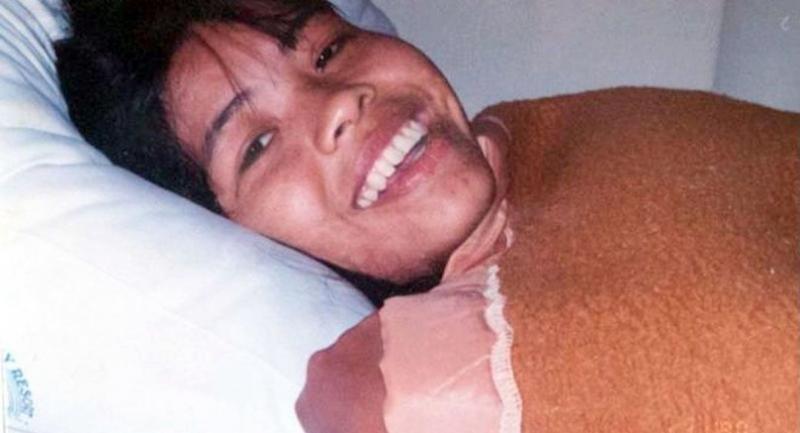 THE PARENTS of a Thai woman found dead in England’s Yorkshire Dales in 2004 and, until identified lately, dubbed “the Lady of the Hills” have asked for the return of her remains. When Richard Hill posed for this picture, he did not realise Lamduan Armitage's body was wrapped around the rocks behind him. // Photo: Richard Hill

For 15 years, Lamduan Armitage, nee Seekanya, lay buried as an unidentified woman in northern England, thousands of kilometres from her homeland. An investigation into her death, long shelved as a cold case, has now resumed, with Lamduan’s British husband firmly denying any wrongdoing.

“We want her skeleton back for a ritual based on northeastern beliefs and traditions,” Lamduan’s mother Joomsri Seekanya said yesterday at her home in Udon Thani.

“The last time she called us, she said her husband assaulted her and she wanted to come home,” Joomsri said. “So what do you expect us to think about it?” Lamduan’s widower, David Armitage has reportedly been living in Thailand for years, working as a schoolteacher. Yesterday he denied killing her.

The London-based Sun tabloid quoted Armitage, 55, as saying, “I didn’t kill my wife. Absolutely not!”

Recent DNA tests have confirmed that the body of an Asian woman discovered near Pen-y-ghent in the vast, rural dales was that of Lamduan.

Police did not at first suspect foul play, but evidence mounted hinting at the possibility of murder. A British coroner rendered an “open verdict”, meaning there was no proof as to the cause of death.

Lamduan’s parents, worried when she no longer called them, sold off their cattle and land to finance a search. They told reporters that during her last visit home, Lamduan husband had urged them to sell their land in response her husband’s urging.

“We spent Bt330,000 and found nothing,” Joomsri said earlier this year.

She said yesterday her grandson – one of three children Lamduan had with Armitage – once visited on his own, looking for his mother. He’d heard that she’d left England to marry another man. “But I never heard she’d remarried,” Joomsri said.

The parents were in the news after a former neighbour who married a Briton and moved to England returned home with a police sketch of “the Lady of the Hills”. “She saw the sketch online and thought it looked like Lamduan in some ways,” Joomsri said. The neighbour helped Joomsri contact a network of Thai women living in Britain. The network in turn arranged for the DNA tests that identified the mystery woman as Lamduan.

Lamduan’s parents are currently focused on arranging their daughter’s funeral. “Let the police handle the legal proceedings against the murderer,” Joomsri said.

Justice Ministry deputy permanent secretary Tawatchai Thaikyo said such matters could be brought before a Thai court even when the suspect is a foreigner and the crime is committed overseas.

“The court can render verdicts in such cases and also order compensation be paid to victims,” he said.

For the past 15 years Lamduan has lain buried in a churchyard in Horton-in-Ribblesdale, a town close to where she was found, the service paid for by the local parish.

The gravestone bears a plaque that reads, “The Lady of the Hills. Found September 20, 2004. Name Not Known. Rest in Peace.”