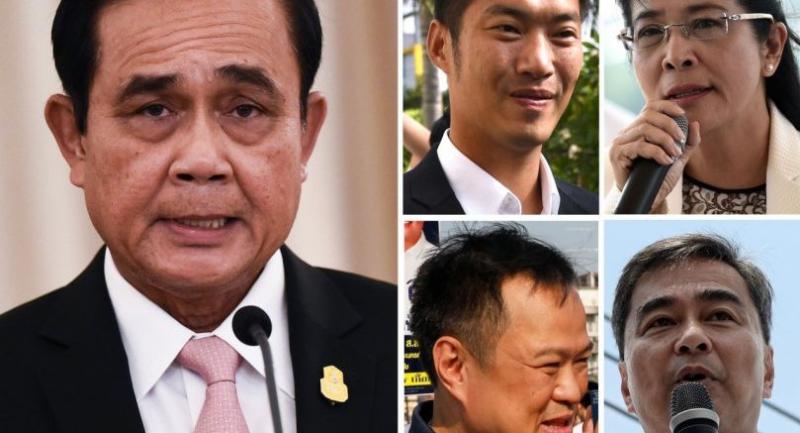 An athletic billionaire, a marijuana advocate, a gruff coup leader, and a candidate jokingly labelled the "strongest man on earth".

The 68 candidates for prime minister in Thailand's upcoming election on March 24 have diverse platforms and backgrounds. But analysts believe these figures have the best chance of winning.

From stern coup leader to prime ministerial candidate mugging for the camera, Prayut has rebranded himself as a man-of-the-people in the run-up to the election.

Nicknamed "Tu", Prayut has an Instagram account with photos of him cooking and riding a train with smiling children. He has also penned saccharine ballads about democracy including one called "New Day".

But the 65-year-old former army chief led the 2014 coup that toppled the administration of Yingluck Shinawatra after violent protests.

Now standing for the Phalang Pracharat party, the grumpy general is popular with arch-royalists and a Bangkok-based elite, using the years since the coup to create an unelected Upper House that could tip the scales his way when parliament votes for prime minister.

Sudarat is the top candidate for Pheu Thai, the political juggernaut linked to self-exiled premier Thaksin Shinawatra and his sister Yingluck, who was ousted in the 2014 coup.

The 57-year-old helped found the now-defunct Thai Rak Thai ("Thais love Thais") party alongside billionaire Thaksin and served in his cabinet after his 2001 and 2005 election wins.

But when Thaksin was toppled in 2006, Sudarat was banned from politics for five years. She later raised money to support restoration work at Lumbini, the birthplace of the Buddha in Nepal.

Each party can nominate up to three candidates. Pheu Thai's second choice, Chadchart Sittipunt, is a former transport minister who secured internet fame five years ago with a viral photo showing him in workout gear, inspiring memes referring to him as the "strongest man on earth".

But neither candidate has the star charisma and draw of the Shinawatra duo.

The fantastically wealthy son of a construction tycoon, Anutin is a fixture of the political scene and a former official under Thaksin.

Analysts say his Bhumjaithai Party, which is popular in the northeast and finished third in the last vote in 2011, could leverage its appeal as a coalition partner in the next government.

Anutin, 52, shook up the political scene this year when his party put up street banners featuring marijuana leaves, touting the plant's economic benefits for farmers after Thailand legalised cannabis for medical use last year. He has said Thailand has the "best strain" of marijuana.

The hobbyist pilot graduated from a US university with an engineering degree.

His political rallies have been muted affairs but the Future Forward Party candidate has cultivated a rockstar appeal among millennials, drawing crowds of adoring, youthful fans who jostle for selfies and call him "Daddy".

The wealthy scion of an auto parts empire, Thanathorn has said that though he comes from the top one percent, he is standing up for the 99 percent.

British-born, Oxford-educated and fervent Newcastle United fan Abhisit is head of the Democrat Party, which draws support from Bangkok and parts of the south.

The polished 54-year-old was appointed premier in 2008 via a parliamentary vote but struggled for legitimacy. His short-lived administration was tarred by a violent crackdown in 2010 that left some 99 dead, mostly protesters -- the worst civil unrest in decades.

Abhisit came under criticism for failing to denounce the junta that took power in 2014. But in a more recent interview he said he would not support Prayut for prime minister and that his party "aims to be the core of the next government".