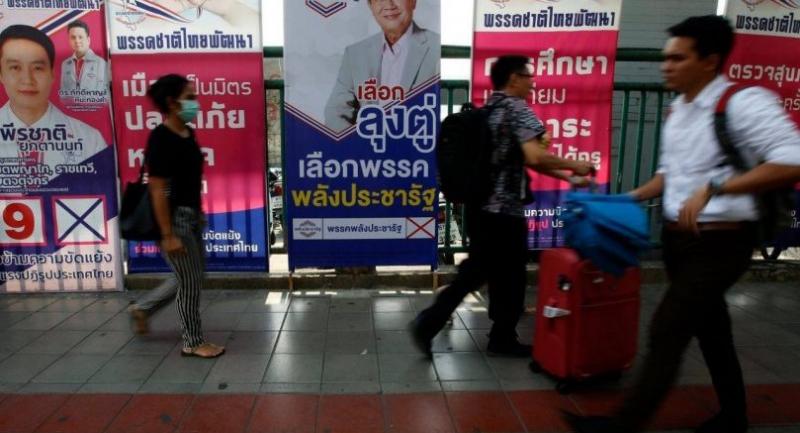 Chaiyaphum -Thailand holds it first election in eight years on Sunday under rules concocted by a junta to keep it in power, but with the appeal of both old foes and the new millennial vote posing an unpredictable challenge.

The junta seized power in 2014, vowing to rescue the country from a treadmill of coups, short-lived civilian governments, and protests. But the kingdom goes to the polls on March 24 as divided as ever.

The arch-royalist army has no intention of leaving politics and has scripted a constitution that gifts it a foothold in power for a generation.

Standing in its way are supporters of its nemesis, ex-premier Thaksin Shinawatra, who has dominated Thai politics since his first election win in 2001.

He was toppled by an earlier coup in 2006, but his affiliated Pheu Thai party taps a deep seam of loyalty from the poor but populous rural north and northeast.

Thousands of rice farmers gathered in a school yard earlier this week for a Pheu Thai rally in rural Chaiyaphum, applauding promises of better times ahead under an elected government and whistling disapproval at every mention of the junta.

"We still love Thaksin... we want him to come back," 65-year-old Lamoon Moosorping told AFP.

Shinawatra-allied parties hope to win a comfortable majority of the 500 elected seats up for grabs across a country wearied by junta rule.

But Sunday's vote is the first under new rules that mean winning the popular vote does not automatically translate into leading a government, or choosing the next prime minister.

Instead, 250 junta-appointed senators are poised to play a key role in shaping the next administration.

With the senate onside, the junta-linked party needs just 126 elected seats to secure a parliamentary majority -- setting up a potential collision over a denied mandate.

"Forming a government and governing will be different," warns Thitinan Pongsudhirak, a political scientists at Bangkok's Chulalongkorn University. With days to go, election fever has gripped much of a country starved for nearly five years of political expression.

More than seven million millennials are eligible to vote for the first time, most unencumbered by old political loyalties -- injecting uncertainty into the outcome.

Sunday's poll will essentially be a "vote on the military" said Thailand expert and historian Chris Baker.

With much of the country viscerally opposed either to the junta or to Thaksin, the ballot will be "more emotional than rational," he added.

The junta's affiliated party Phalang Pracharart is hoping an unspectacular campaign does not translate into a humiliation at the polls.

Its figurehead, army chief-turned-premier Prayut Chan-O-Cha has undergone a last-ditch Instagram makeover in a bid to strike a softer pose and return as a civilian premier, a cause aided by senators whose jobs will be owed to him.

There are 68 candidates running for prime minister, a collage of seasoned politicians, newcomers and political chameleons like Anutin Charnvirakul, whose Bumjaithai party is heavily tipped for a major post-election role.

But among Prayut's many rivals, it is 40-year-old billionaire Thanathorn Juangroongruangkit who has tapped into the aspirations of millennials who are tired of the polarisation and inequality under the conservative junta.

Articulate and telegenic, Thanathorn blames the junta for bending the economy to big business, straitjacketing Thai democracy and plunging the kingdom into an outmoded authoritarianism.

He is unlikely to emerge as premier, but analysts are keenly watching his fortunes for signs of the emergence of a new political force.

"We need change, Thanathorn is a light to take us away from all this darkness," said Panitaluck Manokhan, 30, at recent campaign stop.

But it is a familiar face who looms largest over the election -- Thaksin Shinawatra.

The ex-cop turned billionaire telecoms mogul, has been in self-exile since 2008 to avoid a jail term on corruption charges.

He still sits at the heart of Thailand's political breakdown -- despised by the army and its Bangkok elite allies but adored by the rural poor for farm subsidies and welfare schemes.

Yet a decade after he left Thailand, fortune is not on his side.

Earlier this month the dissolution of one of his parties -- Thai Raksa Chart -- left the Shinawatra faction winded.

The party had proposed Princess Ubolratana as its candidate for premier, but the Thai monarchy is nominally above the political fray and King Maha Vajiralongkorn struck down the move to draft in his elder sister.

The miscalculation took out a key pillar in the Shinawatra election strategy, leaving it with its other party Pheu Thai running in just 250 of a possible 350 constituencies.

Calling for voters to upset the odds with a "landslide victory", Pheu Thai figurehead Sudarat Keyuraphan has appealed to anti-junta sentiment.

"You have to ask yourselves... can you live like this for another five years?" she asked at a rally this week.