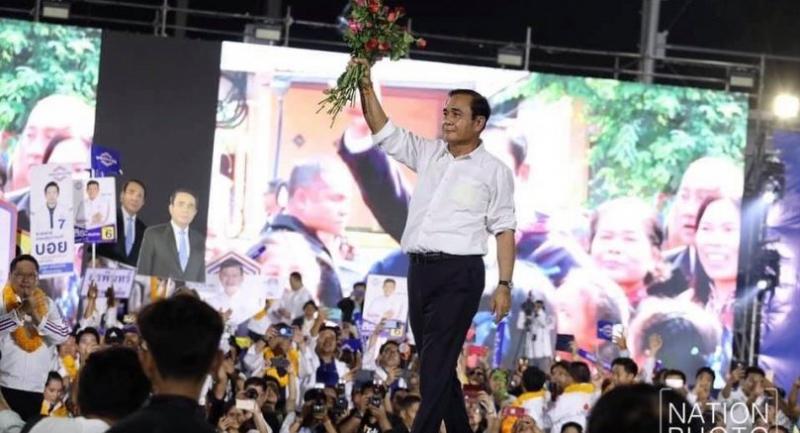 Junta chief General Prayut Chan-o-cha finally went on stage for the Phalang Pracharat Party on Friday in a last-ditch effort to win votes ahead of the general election on Sunday.

This is the first time that Prayut got involved in a rally after being nominated as the party’s sole PM candidate last month.

The final rally for votes was held at the Thephasadin Stadium in central Bangkok and was attended by thousands of supporters, most of whom were middle-aged or elderly. From 5pm, the party’s key leaders began delivering speeches, including party leader Uttama Savanayana and party secretary-general Sontirat Sontijirawong.

The final speech was delivered by Prayut, who instead of climbing on the main stage, ascended on a special stage set in the middle of the stadium like a superstar, to the tune of the popular 1990s hit, “Stop Here with You”. He shook hands with supporters and accepted flowers.

In his speech, Prayut emphasised the three pillars underpinning the country – nation, religion and monarchy.

“I can die for this country,” he declared. “The land that gave me life and home. I have to safeguard it for the future generation.”

After delivering his seven-minute speech, Prayut bid his cheering supporters – all yelling “Uncle Tu, Go Go!” – goodbye as he wrapped up the final rally.

Prayut’s appearance came as a bit of a surprise to many, because despite the authorities saying he would not be breaking the law by campaigning, the junta leader had never indicated that he would take the stage for Phalang Pracharat.

However, Uttama did hint earlier that the “most accepted and loved person” would be joining them on stage.

The final campaign was live-streamed on Facebook, garnering more than 387,000 views as of press time and over 45,000 comments. As for the 24,000 reactions to the live stream, half were angry emoticons while 9,200 were either “likes” or “loves”.