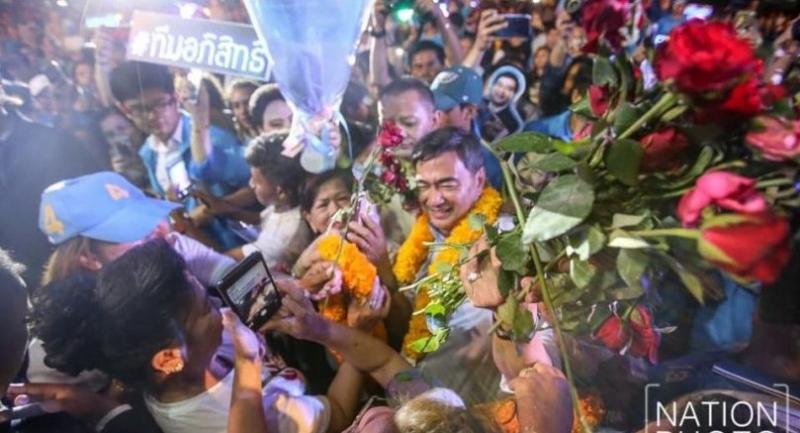 In a final effort to attract voters in Sunday’s general election, Democrat Party leader Abhisit Vejjajiva offered himself up as the next prime minister, promising to release the country from a new round of conflict.

He called on voters to opt for democracy with “integrity” as a way to unlock conflicts and to give his party a chance to form the next government.

In his final speech on Friday, Abhisit told the crowds that it was sad that two parties were using voters as pawns and forcing them to choose between a despised dictatorship or out of fear of the fugitive former prime minister Thaksin Shinawatra. He was clearly referring to the Phalang Pracharat and Pheu Thai parties.

“A new round of conflict will begin if the military continues with its power and corruption, so democracy with ‘integrity’ will be the only way out if we are not to lead the country to new conflicts,” he cautioned.

Abhisit also told voters to not let anyone persuade them to vote out of anger or fear, but to vote with the belief that a democracy with integrity is actually out there.

“On March 24, don’t vote out of fear or anger, but vote for the best choice for your lives and for the country,” he said.

Abhisit also added that he will not tell the media which parties the Democrats would ally with to form the next government, because his only aim is to become the core party in Parliament.

The Democrats’ final rally, held at the Lan Khon Muang Plaza in front of Bangkok City Hall in Phra Nakhon district, was attended by thousands of supporters.